Kill Meg is an optional mission in Borderlands: The Pre-Sequel.

Go back to Professor Nakayama and speak with him.

"One thing's for sure, you're going to be a lot thinner."

Kill Meg becomes available after the completion of the optional mission Paint Job. The first objective is to follow the compass way-point the west side of the World of Shopping and find the trash compactor. This is accessed by triggering a trap door in the floor to drop any Vault Hunters down to the compactor.

The thresher Meg then appears, and the objective updates to kill it. After Meg has been engaged, a timer countdown starts, granting 45 seconds until the compactor closes. The timer stops if Meg is killed. The compactor room can be exited by a hallway leading to another elevator that ascends to the inside of the gun shop, which is only accessible during this mission. The mission can then be turned in to Nakayama. 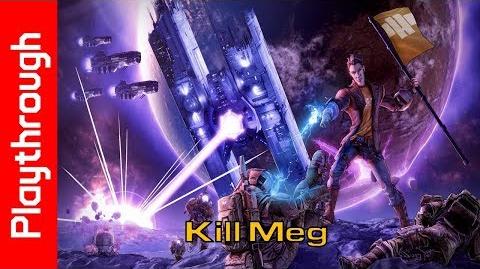