Kill Killavolt is an optional mission in Borderlands 3. It is given by Mad Moxxi in the Sanctuary III.

"Killavolt, a bandit ECHOstreamer, is hosting his very own battle royale. But if Moxxi has anything to do about it, it's gonna be lights out for Killavolt."

As Killavolt is immune to shock damage, non-elemental or radiation weapons should be used to deplete his shield. If the Vault Hunter has a sufficiently damaging weapon, they can aim for his physical shield in his left hand; after sufficient damage has been dealt, Killavolt will drop to his knees and his head will be exposed. Once his shield has been broken, incendiary weapons should be utilized for maximum effect.

After Killavolt receives sufficient damage, he will teleport out of the arena and 2 to 4 enemies will spawn, consisting of fanatics and psychos. Killing these enemies quickly is recommended as Killavolt will perform a charging attack and swing his shield when he isn't targeted.

"You sure know how to please a girl in front of an audience, sugar. I am happy to call you my champion any time you like. Look, this ain't the most civilized galaxy. I get that. I can't shoot every sonofabitch who runs his mouth or tries to disrespect me, heh...
... but I can try." 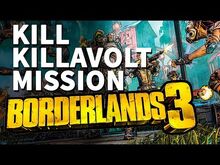