Long Way To The Top

Kickstart My Heart is a story mission in Mr. Torgue's Campaign of Carnage given by Moxxi. The mission is performed in The Forge.

"Only one man stands between you and Piston: a teenage gladiator named Flyboy.

You've angered him, and now have access to his lair. Get in there and knock him off his pedestal."

After completing Battle: Twelve O'Clock High players need to run through the buzzard area again in order to reach Flyboy's Lair. From the top of the tower, is an elevator to the top platform. Upon entering the top platform, Piston's Blimp appears and kills Flyboy. The ensuing fight involves fighting the blimp instead of Flyboy, and this will fly overhead and fire missiles. After a little while, buzzards will join the fight, making it much harder.

The blimp's attacks from above can quickly down unwary participants, but cover is plentiful on the top level of the Forge. Once under cover, players can duck their characters in and out of openings while whittling down the blimp's shields, retreating into cover when necessary to avoid damage or recover shields.

The blimp's critical hit spot is the crew gondola at the bottom of the blimp, which presents a conveniently large target. The blimp's durability comes mostly from its shields, so if a player is willing to prepare for this fight, it is advisable to bring along a shock weapon to speed up the first portion of the fight. Once the shields are depleted, the "health" bar of the blimp falls much more quickly.

There are several controllable turrets located on the roofs and platforms on the Forge's top level, and though the automatic rocket salvoes they fire deal sufficient damage, they are extremely vulnerable to attack, and are quickly destroyed by the blimp whenever a player attempts to use one. This is especially true in True Vault Hunter Mode as the buzzards, which are launched periodically from the blimp, will generally destroy the turrets the instant a combatant mounts one.

By staying inside the cage, players can shoot the blimp through the opening at the roof when it flies by. This cage shields characters from virtually all damage, providing excellent protection as long as characters remain inside.

"No more messing around - it's time to win this tournament." 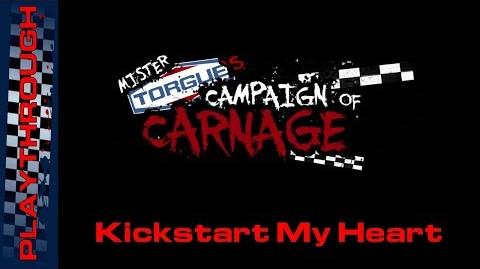 Kickstart My Heart
Retrieved from "https://borderlands.fandom.com/wiki/Kickstart_My_Heart?oldid=419188"
Community content is available under CC-BY-SA unless otherwise noted.