Katagawa Jr. is one of the antagonists of Borderlands 3. He works for Maliwan and can be found on Promethea.

Katagawa is the son of two higher-ups in Maliwan, as well as an executive in Maliwan himself. He had 11 older siblings, who he had Tyreen kill after his father told him that he was 12th in line for Maliwan. Naoko is the only sibling who managed to survive. She escaped and disguised herself as an Atlas soldier and can be found in the side-mission Proof of Wife. Katagawa's quotes and ECHO logs seem to indicate he lead a rich hedonistic lifestyle (e.g. owning a 'pleasure yacht' with an antigravity pool.)

Katagawa Jr is interested in Rhys's company, Atlas, but above all his friendship[1].

Some time before the events of Borderlands 3, he signs a deal with Tyreen and Troy Calypso when they go to Promethea in search of the Vault.

During the Hostile Takeover mission, Katagawa contacts Zer0 after they and the Vault Hunters secure the Maliwan weapons depot. He tells Zer0 that his offer to come work for Maliwan still stands, and tells the Vault Hunters to stay out of his way.

When the Vault Hunters meet up with Rhys in Space-Laser Tag to get the Vault Key fragment on Maliwan, Katagawa destroys Rhys' ship, forcing him to hijack Maliwan shuttle instead.

During the mission, despite numerous threats of destroying Atlas, the most Katagawa appears to do is blow up such places as Rhys's favorite frogurt and bagel stand or one of his theme parks. After Rhys makes it clear that he has no intention of going along with his wishes and destroys Katagawa's pleasure yacht, Katagawa constructs a suit similar to Zer0's (it's unclear as to how) and tries to trick Rhys into believing that Zer0 has betrayed him. Katagawa tries to kill Rhys, but the real Zer0 shows up to stop him, and the Vault Hunters kill Katagawa. 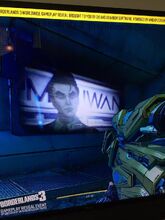 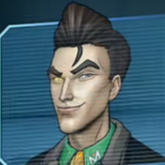 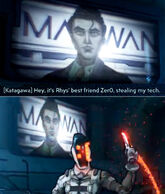 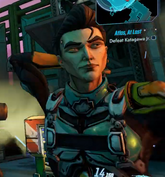 Katagawa during Atlas, At Last 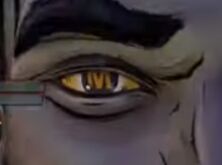 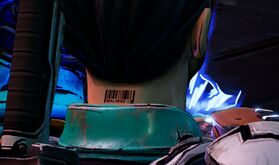 
Retrieved from "https://borderlands.fandom.com/wiki/Katagawa_Jr.?oldid=446863"
Community content is available under CC-BY-SA unless otherwise noted.