Katagawa is the son of two higher-ups in Maliwan, as well as an executive in Maliwan himself. He had either 11 or 12 older siblings, which, according to Rhys, were killed by Tyreen after his father told him that he was 12th in line for Maliwan. Naoko was the only sibling to escape and disguised herself as an Atlas soldier to keep a low profile.

Katagawa's quotes and ECHO logs seem to indicate he led a rich, hedonistic lifestyle (e.g. owning the Zanara, a pleasure yacht with an anti-gravity pool).

After developing an interest in acquiring Atlas and Rhys's friendship, Katagawa Jr. signed a deal with Tyreen and Troy when they search for the Promethea Vault. As the head of Mergers and Acquisitions, Katagawa is responsible for sending Maliwan troops to Promethea to forcibly absorb Atlas. During the Hostile Takeover mission, he contacts Zer0 to say that his offer to come work for Maliwan still stands, and tells the Vault Hunters to stay out of his way.

After Zer0 and the Vault Hunters defeat his Gigamind, Katagawa tells the Vault Hunters via ECHO that they've gone from being inconsequential to being a potential threat that he intends to get rid of. When the Vault Hunters meet up with Rhys in Space-Laser Tag to get the Vault Key fragment on Maliwan, Katagawa destroys Rhys's ship, forcing them to hijack a Maliwan shuttle with Rhys' help instead.

During the mission, despite numerous threats of destroying Atlas, the most Katagawa appears to do is blow up such places as Rhys's favorite frogurt and bagel stand as well as Lazy River Land, instead of Atlas HQ itself. After Rhys makes it clear that he has no intention of going along with his wishes and destroys Katagawa's pleasure yacht, Katagawa orders another invasion against Atlas and constructs a suit similar to Zer0's in an attempt to trick Rhys into believing that Zer0 has betrayed him. Katagawa then tries to kill Rhys and steal his Vault Key fragment, but the real Zer0 returns from radio silence and rescues Rhys. Zer0 knocks off Katagawa's helmet, revealing him as the false Zer0. With his cover blown, Katagawa engages in a battle with the Vault Hunters but meets his end when his suit malfunctions, letting out one final scream as he disintegrates. 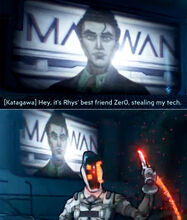 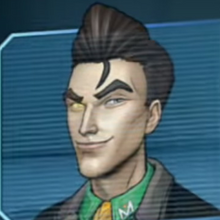 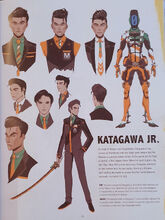