Jaynistown:
Cleaning Up Your Mess

Another Piece Of The Puzzle

"An idiot Vault Hunter follows the direction of an insane archeologist, and the result is disaster. Jaynis was no angel, but under Taylor's rule, Jaynistown is a greater threat than ever. You caused this mess, so you can clean it up by killing Taylor Kobb. If reaching the Trash Coast is so blasted important, his hacked Claptrap should allow you to pass once he's dead." 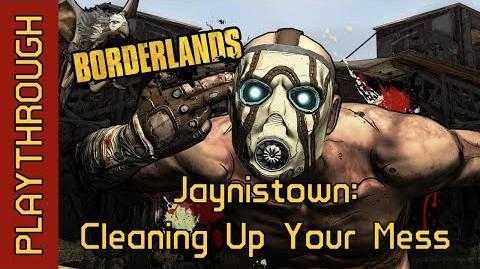 Kill Taylor Kobb, then talk to his Claptrap.

It is immediately apparent that a series of Gatling Turrets have sprung up in "Taylortown". They can be destroyed from various covered positions with a sniper rifle or corrosive/explosive weapon and destroying them promptly before entering the town is always a beneficial way to proceed. Bandits can, and will, crawl out of doorways, potentially catching intruders by surprise, so be on the lookout for new arrivals to the conflict at all times.

Once the town has been sufficiently cleared of bandits, the next stage is an open gate leading into an area with a large rock and a clifftop building. Two Rocket Turrets will emerge from the roof of the building as intruders approach, and two Bruisers will spawn along with Taylor Kobb. Another bandit or two may also spawn nearby when the bruisers appear.

It is suicidal to enter the area with the five enemies present, as the rockets launched from the turrets have rough homing capabilities, along with the weapons the Brusiers use, which can deal considerably high damage. The Brusiers may attempt to chase the Vault Hunters outside the area, though they may also get stuck behind the fences.

Deal with the Rocket Turrets first, before killing the Bruisers if they haven't been killed already. The only remaining enemy should be Taylor Kobb, who is armed with The Roaster - a Maliwan rocket launcher imbued with heavy incendiary elements and burst fires three rockets in rapid succession. It's considerably less accurate than the rockets fired from Bruisers, but can still pack a heavy punch if a direct hit lands. Taylor Kobb will not attempt to melee players, but it should be quite easy to take him down once he is alone.

Once Taylor is killed, head back to where he was first met and turn the mission in to his Claptrap.

"With Taylor Kobb dead, his hacked Claptrap should have reverted to his original programming. He should be willing to open the passage to the Trash Coast now."