Jaynistown: A Brother's Love is a story mission in Borderlands given by Taylor Kobb.

"My brother Jaynis is the leader of Jaynistown, and he's turned the place into a hive of scum and villainy. It wasn't always that way. Good people used to live in that town, but his thugs chased them all away. When I protested, he exiled me, his own brother! It ain't right, and the people of that town deserve better. Jaynis needs to be 'removed' from office. Violently." 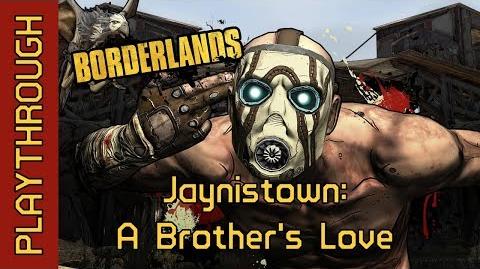 The objective of this mission is to kill Jaynis Cobb and this involves fighting through a number of his bandits to reach him. Entry via the front gate will attract fire from various angles as the bandits appear from the buildings and shoot out into the open area inside the front gate. And alternative approach can be made from the lookout tower not far from the gate where characters can be made to jump from from the access ramp to the rock wall overlooking Jaynistown. This vantage point can be used to rain fire down on the bandits from relative safety before proceeding inside.

"Thank you. You understand why a man can't kill his own brother. But, bounty hunters are another matter. At any rate, this is the beginning of a new era! Soon Jaynistown will be known as Taylortown!"