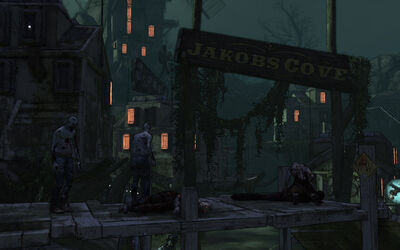 Jakobs Cove is the name give to the zone and the town in the center of the zone. Jakobs Cove is the primary location featured in the official add-on content "Zombie Island of Dr. Ned (DLC)". It is here the player begins their mission to find out what happened to the inhabitants and what caused the zombie infestation. Jakobs Cove is the hub for the surrounding areas.

Retrieved from "https://borderlands.fandom.com/wiki/Jakobs_Cove?oldid=53800"
Community content is available under CC-BY-SA unless otherwise noted.