Jakobs Cove is the name given to the zone and the town in the center of the zone. It is like Fyrestone, T-Bone Junction, New Haven, and The Underdome, being the central hub of the zone with a bounty board. Jakobs Cove is the primary location featured in the official add-on content "Zombie Island of Dr. Ned (DLC)". It is here the player begins their mission to find out what happened to the inhabitants and what caused the zombie infestation.

Jakobs Corporation established the town of Jakobs Cove as a company work town to support the Lumber Yard. When Jakobs found a source of wood on Pandora, they quickly established their operations here. The town of Jakobs Cove was built to provide housing and support for Jakobs' employees working at the mill. With the mill up and running and the town built, Jakobs continued to expand its operations. Jakobs built Generally Hospital to provide medical care for its injured workers. As the operations grew more living space was needed and Hallow's End was established, it was here that Jakobs built a care home for its permanently injured employees. 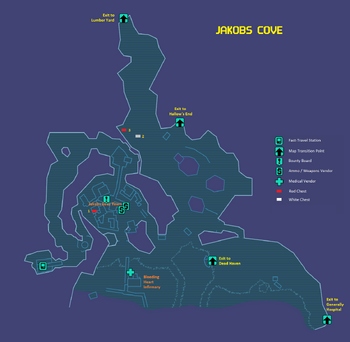 Retrieved from "https://borderlands.fandom.com/wiki/Jakobs_Cove?oldid=172168"
Community content is available under CC-BY-SA unless otherwise noted.