Jakobs is a weapons manufacturer. Their weapons are primarily non-elemental, featuring high damage and firerates that are as fast as one can pull the trigger, at the cost of higher recoil. They create traditional Old Western style weaponry, with long handles or stocks, flowing ornate shapes, and relatively slim profiles. Because of this focus on traditional design, Jakobs weapons usually have limited magazine sizes.

Jakobs specializes in manufacturing single-action revolvers, bolt action sniper rifles, various shotguns and assault rifles in a classic style and with iconic scales or stocks made from genuine wood. The wood is harvested from the forests of Eden-6, a swampy, mostly untamed moon where the corporation's headquarters is located and where the Jakobs family has resided since its fleet first crashed there long ago. Every Jakobs weapon is handcrafted and high-quality, crafted entirely of high-grade wood and metal, and they fire as quickly as the user can pull the trigger. The company scorns pretentiousness, eschewing flashy features like elemental effects in all but its rarest weapons. Jakobs also manufactures its own bullets, which give its guns increased stopping power and are designed to ricochet to hit more targets with the same shot, not to mention they possess a distinctive scent due to the gunpowder being aged in used liquor casks.

Jakobs has been a successful weapons manufacturer for over three centuries and is considered one of the less antagonistic corporations of the galaxy. During the Corporate Wars, Jakobs mostly kept to itself due to its smaller size and survived the conflict relatively unscathed. Despite a reputation for straightforwardness and pride in rugged independence, however, Jakobs is not always above resorting to dirty corporate tactics. They generally do not care for the people who help or work for them, as evidenced by the threats used by the call center clerk during Hitching A Ride and the idle remarks of the Jakobs Representative Claptrap. The announcer in Jakobs Cove proves that they see their employees as assets rather than people, as it still expects the remaining 3% of the working population of the island to still continue working. Similarly, it would seem Jakobs is a corporation mired in bureaucracy and red tape, as evidenced by the errors they make and difficulty they have in trying to extract the Vault Hunters from Dead Haven, as well as the announcements in the town of Jakobs Cove. Circumstances appear to differ on the Jakobs homeworld of Eden-6, where the Jakobs family live next door to the important logging town of Reliance and personally involve themselves in the gritty intricacies of the weapons manufacturing business.

Until recently, the CEO of Jakobs and family head was Montgomery Jakobs, the grandson of the company's founder. Montgomery's son and heir, Wainwright Jakobs, considered himself ill-suited to run the family business and tried to persuade his father to make Clay, a reformed smuggler and family friend, the heir instead. That all changed when Tyreen Calypso personally assassinated Montgomery and had Aurelia Hammerlock take control of the company so that the Children of the Vault could pillage Eden-6 and locate its Vault. Wainwright enlisted the Crimson Raiders in liberating Eden-6 and Jakobs from the Children of the Vault.

The following are items produced by Jakobs:

The following are items made by Jakobs.

White tier weaponry from any company will not have a bonus prefix, meaning that a white-tier Jakobs revolver, for example, will never have a scope or gunstock.

White tier rarity revolvers will exclusively be top-break instead of having swing-out cylinders. Blue and higher revolvers will have iron sights, and the rear part of the revolver, where the hammer is located, will be much more bulked up in a manner inspired by the Colt "Peacemaker" revolver. Purple and higher-quality revolvers also have various small colored devices set into the fluted cylinder's gaps,

¹ This set of prefix is only obtainable through Tiny Tina's Assault on Dragon Keep.
² Since the only Seraph weapon made by Jakobs is the Hawk Eye, it can only be obtainable through Sir Hammerlock's Big Game Hunt.
³ The Unforgiven requires the Ultimate Vault Hunter Upgrade Pack. The Bekah and Godfinger requires the Digistruct Peak Challenge expansion pack. 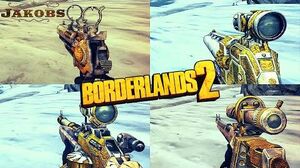 In addition to their full range of common pistols, shotguns, assault rifles and sniper rifles, Jakobs manufacture in Borderlands: The Pre-Sequel include the items listed below.

Jakobs weapons in The Pre-Sequel uses the same prefixes as in Borderlands 2.

The western, rustic styling of their weapons is more prevalent in this game, with variants of their weapons performing in a manner similar to early twentieth-century firearms. Like all manufacturers, Jakobs now creates their own variety of custom weapon parts; most significantly, this has made all of their common shotguns fire in pump-action, lever-action and single shot, while all their sniper rifles have a bolt action restriction that limits their fire rate.

Critical hits from Jakobs weapons will cause one or more bullets to ricochet off the target and seek out another. Standard bullets will aim in the direction of targets, but they do not have innate homing properties. Certain unique and legendary weapons have ricochet properties that work differently. Jakobs guns do not feature the use of the new alternative fire mode.

Jakobs is still known for producing non-elemental weapons – none of their common weapons can spawn with an element. However there are significantly more unique and legendary Jakobs weapons which do have elemental capacity.

*Mashers and Gatlin's are not technically a product, as they are part prefixes that add a unique trait to an existing common weapon.

Weapons variants in Borderlands 3 are named based on the type of barrel they possess, and have unique gun parts based on their weapon class.

The list of weapon parts on each weapon can be seen below:

Unlike their pistols and assault rifles, Jakobs shotguns in Borderlands 3 instead function in either pump-action, lever-action or single-shot firing modes. Pump-action varieties may be racked via the grip or trigger handle.

Jakobs shotguns can spawn with an extra barrel as a barrel accessory (depending on the model), which adds an additional shot to each firing method:

Jakobs pistols function identically to those in Borderlands 2, firing in single-action with a high fire rate. Jakobs pistols can have a unique grip prefix:

Jakobs assault rifles are more varied than those in Borderlands 2. While they still function in semi-automatic mode, they can also appear with a lever-action mode as well. They are styled like Wild Western and battle rifles, with similar reload animations to boot. Jakobs assault rifles can have two unique trigger prefixes:

Unlike in Borderlands 2, Jakobs sniper rifles are restricted to bolt-action only, limiting their fire rate. Design-wise, they appear similar to those in the previous game, although higher-quality rifles may feature leather padding on their stocks, or artfully crafted metal trigger handles. They also feature retractable scopes, some of which are pushed aside to allow for reloading.

*In the parts card, all Jakobs sniper magazines are bugged and are listed as having 8 rounds.