Jack's Other Eye is an optional mission in Borderlands given by Helena Pierce. One-Eyed Jack is a bandit leader in The Rust Commons West who is going to attack New Haven, and must be stopped.

"What did you and Marcus do? One-Eyed Jack is madder than hell, and my sources tell me he's going to take it out on New Haven. Our only chance is to kill him before he strikes. This is your fault. You fix it." 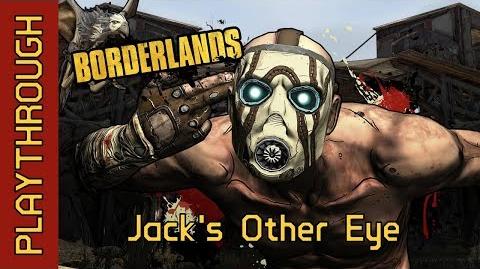 Kill One-Eyed Jack, and bring back his eye as proof.

Pierce is offering an assassination mission to kill One-Eyed Jack. Jack is located back in the vicinity of the ammo dumps in the previous mission, and exits a small house at the base of the hill when the area is approached.

One-Eyed Jack moves through an area accessible to vehicles, rendering him a relatively easy target to eliminate seeing as he can simply be run over. Alternatively, he can be fought on foot, although he presents an unusual target enemy due to his unique revolver, Madjack. The Madjack's bullets have odd spiral trajectories, and are very damaging against both shield and flesh alike.

Nearby bandits may pose an additional problem, and between these and One-Eyed Jack himself, it is recommended to conduct the fight from behind cover and maintain room to retreat.

"That's Jack's eye, alright. I know I was upset with you, but you have taken responsibility for your actions and fixed the situation. Thank you."