For other uses, see Jack (disambiguation).

Timothy Lawrence, formerly known as "Jack", is a look-alike body double of Handsome Jack. Representing the Doppelganger class, "Jack" is the fifth playable character in Borderlands: The Pre-Sequel, first revealed at PAX Prime 2014. Jack was added as post-release downloadable content released on November 11, 2014, for $9.99 USD/$14.40 AUS. His skill summons two Digi-Jacks to fight for him.

He reappears in the Borderlands 3 DLC Moxxi's Heist of the Handsome Jackpot, where it is revealed that he has been imprisoned on The Handsome Jackpot for seven years following Handsome Jack's death. He retains his appearance, though he has a crack on the left side of his mask, and he uses his actual name, not his alias.

According to ECHO logs in Jack's Office and as part of "Jack'" ECHO logs granted as a personal item at the start of the game, Jack's real name is Timothy Lawrence. He was elected to undergo the major reconstructive surgery performed by Dr. Autohn to pay off his student loans.

"Jack" is called in as part of the Vault Hunter group that assists the real Jack on Helios.

While looting the Handsome Jackpot, the Vault Hunters hear a cry for help. Pretty Boy is sending Loaders after someone in a makeshift hideout. After defeating Pretty Boy's Loaders, it is revealed that Timothy Lawrence is trapped in the casino and has been since the death of Handsome Jack. His mask is cracked, and his right hand has been grafted with a Hyperion-brand cybernetic authorized access key dubbed "The Winning Hand". After finding out that Timothy is also trying to get into Jack's Tower, the Vault Hunters team up with him upon Moxxi's approval (who still seems to openly distrust him).

Because Timothy's Winning Hand grants him full access to every facility in the casino, Pretty Boy kidnaps him, and the Vault Hunters must rescue him. After killing Pretty Boy, the casino activates the "Screw Everyone I'm Rich" Protocol, which starts piloting the casino into a black hole. At first, Timothy tells the Vault Hunter to simply flee to safety, however Moxxi refuses the order and the Vault Hunter(s) agree with Moxxi that they can't leave Timothy behind. Timothy then comes up with an idea and cuts off his cybernetic hand using his laser prison cage and gives it to the Vault Hunters to override the protocol.

In the ending of the DLC, Timothy, sans one hand, finally asks Moxxi's why she agreed to the date that she had with "Jack" (a detail he has brought up a few times). He did so disguised as Jack, so he was confused why she agreed to have a dinner date with Jack when "He was the worst". Moxxi admits to having known it was never Jack she met up with, otherwise she wouldn't have shown up, something that makes Timothy happy to learn.

Jack's action skill summons two Digi-Jacks to fight for him, who constantly lose health and are continuously resurrected for its duration. They battle using wrist-mounted lasers, punch and kick enemies who come too close, and can serve as a distraction against foes. The Digi-Jacks can be outfitted with modifications via skills, such as a shotgun laser or even being spawned as Badasses.

His three skill trees are: 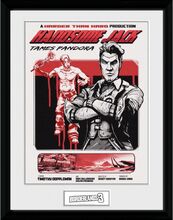 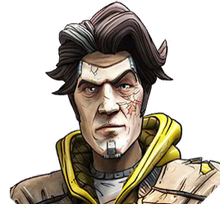