It Ain't Rocket Surgery is an optional mission in Borderlands: The Pre-Sequel.

"Does the word "brain" fill you with inexplicable horror?"

This mission is available from Dr. Spara in the Advanced Propulsion Weapon Testing lab of Research and Development. She needs three tork brains to use as guidance systems for her test rockets. Directly outside of the rocket lab, in Indigenous Species Research, there are multiple torks available to be killed and harvested for their brains.

Next, she needs three stalker wings. Only spring stalkers in the north end of the Stalker Biome drop the wings. Shock damage is ideal for stripping them of their shields, at which point they become visible.

Next she will need three barrels of stalker blood. One barrel is available at the stalker exam table in Observation Room 11-B, in the far north of the Biome. A valve controlling the exam table's drain must be activated, draining the table of stalker blood and filling the barrel above the valve. Once filled, the barrel may be removed from the apparatus.

A second barrel is available at the exam table just inside the first entrance to the labs in the Stalker Biome. A third barrel can be secured back at Indigenous Species research.

Once all the materials are brought back to Weapon Testing, the wings and barrels of blood must be applied to the three rockets. One of the tork brains must be installed to a rocket, which can then be test fired via a console. Due to the lackluster results, Dr. Spara decides a human brain is more desirable.

Human brains can be obtained from the Lost Legion Marines at De Quidt Synaptic Processing, the easternmost wing of Research and Development. The marines must be killed with a critical hit to drop their brain.

A human brain can now be placed in one of the prepared rockets and launched. The results are more to Dr. Spara's liking, so she offers instructions to combine a tork brain and human brain in the SCIENCE BLENDER. The brains must be placed on opposite sides of the blender, then the blender activated by pressing a button.

The combined manbeast brain must then be cooled by freezing it (cryo weapons are made available in a nearby chest if none are at hand). The manbeast brain can then be placed in the last rocket and launched, which will destroy Dr. Spara's house, ironically of little concern to her. The mission can then be turned in to the doctor.

"It may not be rocket surgery... but it ain't brain science, neither." 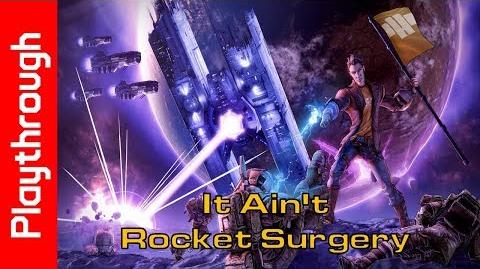 It Ain't Rocket Surgery
Retrieved from "https://borderlands.fandom.com/wiki/It_Ain%27t_Rocket_Surgery?oldid=473062"
Community content is available under CC-BY-SA unless otherwise noted.