Intelligences of the Artificial Persuasion is the sixth story mission in Borderlands: The Pre-Sequel given by Janey Springs. The mission is performed starting at Concordia, and continuing in Triton Flats, Outlands Canyon, Outlands Spur and Pity's Fall.

After taking mission from Janey, the Vault Hunters must take her scrambler and go to Triton Flats. Small group of scavs protect the Stingray garage and must be eliminated. Gate to the garage is locked but Janey has the password - 8008 - which is used to gain access to the garage. Once inside, the scrambler provided must be connected to a nearby console in order to upload the blueprints and digistruct a Stingray. Using Stingray's booster, lava fault must be jumped over and exit to the Outlands Canyon reached.

To reach the Fast Travel station on the opposide end, Research Facility and Bogan's Warren infested with the various torks and Scavs must be passed through. Past the Fast Travel station, Pickle is found in the Fingersmith Hall. An Air Dome generator and all three types of vending machines are found here as well.

After passing through the travel gate into Outlands Spur, waves of Scavs and Raiders in the nearby encampment must be fought before heading through the kraggon-infested field following the pipeline to the north.

Any Scavs encountered outside the Processing Plant entrance must be eliminated, before heading inside to do battle with even more scavs and lunatics. Once the area is clear, a bridge to the Drakensburg to the east must be crossed over.

After the bridge struts get retracted, command console that will re-extend the bridge must be activated. When this fails, Pickle suggests that dumping the liquid methane onto the lava below will create an impromptu ice bridge. When this attempt fails as well, Pickle directs the Vault Hunters to the Pumping Station which must be reactivated to restore the methane flow.

Access to and the Pumping Station itself is heavily guarded by turrets and waves of common scavs with some Badass Outlaws and Badass Scavs thrown into the mix. Once the area is clear, command console found on the top level of the facility is used to restore the methane flow.

On the way back to and at the Height's Perch Camp itself, number of enemies including kraggons and stolen Dahl Jetfighters must be fought. On top of the swingarm there is a command console which must be activated to redirect the methane flow.

A secret chest can be accessed after this point, located directly under the room with bridge controls. The entrance is hidden under the stairs that lead to methane dumping valve, and is opened after the Activate pumping station objective is completed. The exit from the room is activated by the switch on the wall. At the moment of opening the chest (that is seen through the glass floor in the bridge control room), the Bosun will yell "Leave that alone!". The chest has a higher than average chance of spawning blue quality weapons or higher.

Back at the Processing Plant, a valve must be opened to dump methane into the lava. Once the lava has frozen over, it is possible to go across shiny new not-land bridge towards the Drakensburg. A Badass Kraggon will emerge from the ice, but the fight against this monster is fairly easy if just keep moving to avoid it's projectile attacks. After bringing the beast down, head through the travel gate into Pity's Fall.

Drakensburg's gate is defended by several waves of various scavs units and laser turrets. All three types of vending machines are found just past the Drakensburg's entrance, and the Vault Hunters should use this opportunity to restock their ammo. The Core Systems, and the path leading to the Command Center is heavily guarded by a large group of common scavs. As the Vault Hunters attempt to head through the door to the Command Center, the Bosun will power up a defensive shield that will need to be disrupted before continuing.

After boarding the Drakensburg, visit the vending machines to resupply (a lot of the Bosun's men encounter throughout the next section) and pass through the doorway on left. Deal with the Armored outlaw in the "Core Systems" area first, as his attacks are far more powerful that those of the common scavs and lunatics nearby. As attempt to head through the door to the Command Center, the Bosun will power up a defensive shield that will need to disrupt before continuing.

After receiving a transmission from a new ally, The Skipper, Vault Hunters must fight their way through the ship to the Hangar Bay, where a large group of enemies backed up by a laser turret is guarding the doors to the Engine Room. Once inside, rather large group of scavs must be dealth with before a computer console in the control booth is used to turn the engines up to FULL power.

Flow Regulator, the glowing orange cylinder near the ceiling, must be destroyed. After taking care of yet another wave of the Bosun's men, computer console on top of the engine core must be activated to open the Power Stabilizer core and destroy it. Finally, console at the stern of the ship must be activated to jettison the main engine.

After dislodging the ships engines, the Vault Hunters must fight their way through the engine shaft and Shattered Aft to disable the force field controls. The Bosun threatens with his "best" soldier, Poop Deck, but the Skipper helps make quick to defeat him having simply crushed him with the door.

Pass through the Crew Quarters and into the Security Room where the central command console must be used to deactivate the Bosun's force field. After shutting down the barrier, the Vault Hunters must pass back through the Core Systems area and start making their way down the Suspension Bridge to the Command Center. Once all of the various common and badass scavs on the bridge have been dealt with, the elevator at the opposite end must be used to enter the Command Center and confront the Bosun. Ammunition and medical vendors found just before the elevator should be used to restock as needed.

Speed is the key during this fight, as not only will the Vault Hunters be facing off against the Bosun in his heavily armed captains chair, but there will also be several waves of henchmen gunning for them as well. Wilhelm should use Wolf and Saint as often as possible. Gladiators and Lawbringers should use their skills to take out as many henchmen as they can, and FragTraps should cross their fingers for a BlightBot or MinionTrap when running VaultHunter.exe.

All of the fire should be focused on the Bosun at first, in order to bring down his shield as quickly as possible. Once his shield is gone, herd of raiders and lunatics should be taken care off before re-focusing efforts on the big boss. Keep whittling down his health and eventually the Bosun will be no more.

As an alternate strategy, going into the Control Room just deep enough to provoke the Bosun then retreating back to the far end of the elevator, will most times result in the Bosun staying fairly stationary and very few if any of his henchmen spawning. If need be, two closest pylons with shield generators on top, can be used as cover.

After the battle is over, the Vault Hunters should head into the AI Hub at the far end of the Command Deck to meet the Skipper and complete the mission.

You've found an AI core that should suit the needs of a blossoming robot army. Now for the body... 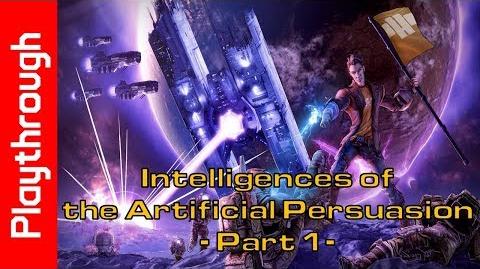 Intelligences of the Artificial Persuasion - Part 1 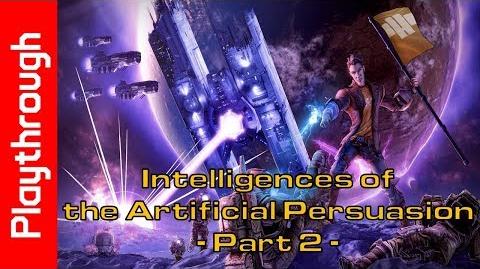 Intelligences of the Artificial Persuasion - Part 2 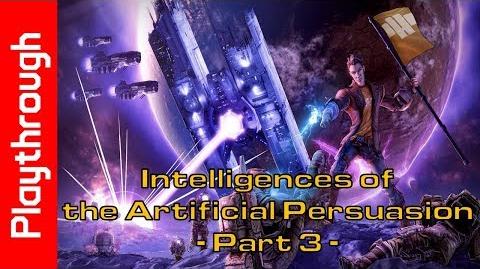 Intelligences of the Artificial Persuasion - Part 3
Retrieved from "https://borderlands.fandom.com/wiki/Intelligences_of_the_Artificial_Persuasion?oldid=456494"
Community content is available under CC-BY-SA unless otherwise noted.