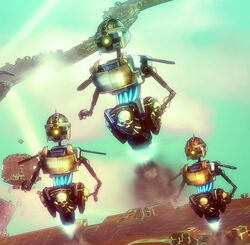 Insecurity will battle against other enemies such as bugs, viruses, and glitches, but use Clapdogs as allies.

Insecurity forces are nearly always accompanied by Clapdog units which fight alongside them.

Within Subconscious, Insecurity units have unique names, and slightly different character models/skins. The only other difference is that all of the Insecurity units will be wearing helmets which prevent critical hits until it is shot off, something otherwise typically only worn by Badass Defender.SubRoutines and Badass WH33L-TPs.

Retrieved from "https://borderlands.fandom.com/wiki/Insecurity?oldid=430864"
Community content is available under CC-BY-SA unless otherwise noted.