The Forest
Mines of Avarice

Immortal Woods is an area of woods and ruins in Tiny Tina's Assault on Dragon Keep.

Conqueror's Crypt is a small crypt located between Vitality Grove and Earthen Vein Chasm. Just before the exit, there is a throne with a skeleton, presumably of the Conqueror, sitting in it. Two unassuming chests an number of other lootable objects cam be found here.

Earthen Vein Chasm is a deep ravine separating the Immortal Woods from the mountains supporting the Mines of Avarice. A winding path with a cliff wall on one side, and sheer drop on the other, leads to a bridge across the chasm to the mines. Only dragons inhabit this area, and most are flightless juveniles on the path itself, although some can be seen in the skies above.

Fields of the Fallen

Fields of the Fallen is an area in the southernmost part of the map. It features one large and several smaller crypts as well as number of graves. This area is protected by a large number of skeletons. One unassuming chest alongside number of other lootable objects and the Vault symbol can be found here.

The Sacred Ruins is an old ruined church area, with little left of the structure, but some crumbling walls and the remains of a dome in the middle. An upper floor in the middle section can be accessed by scaling a wall in the north-east corner of the Sacred Ruins, running along the top and leaping across to a wall adjoining the middle structure.

That One Blimp You Destroyed

This is an area holding the burning wreckage of the patrol blimp previously destroyed in Flamerock Refuge. The white knight Roland makes his first appearance in the campaign at this location.

Vitality Grove is a walled-off garden where Tree of Life is. Once entered, Vitality Grove can't be exited until Skeleton Kings with their entourages are defeated. 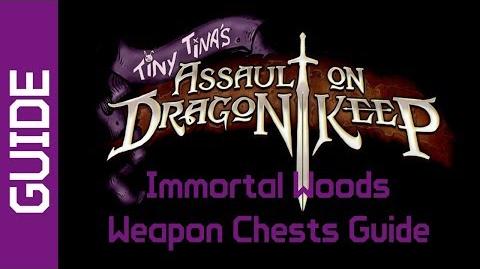 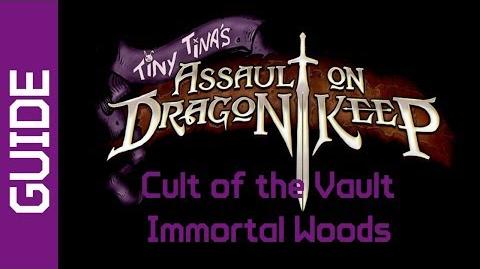 BL2 Immortal Woods Cult of the Vault Guide
Retrieved from "https://borderlands.fandom.com/wiki/Immortal_Woods?oldid=432658"
Community content is available under CC-BY-SA unless otherwise noted.