I Like My Monsters Rare is an optional mission in Sir Hammerlock's Big Game Hunt.

Upon the acceptance of this mission, Thirstblood makes contact and requests that various unusual creatures be killed. These are located variously around Hunter's Grotto and beyond, with certain creatures having high likelihoods of appearing in particular places.

A pink borok can be found near the Hunter's Grotto Fast Travel. It appears in a borok pack on the path to Scylla's Grove from the tunnel under the fast travel station.

Tailless scaylions frequently appear in scaylion packs in most areas of Aegrus. There is often one right near the Ardorton Station Fast Travel station.

Albino skags can be found among skag packs in Scylla's Grove, in the area of Urine, You're Out.

Slagged spores are rare, but sometimes appear drifting in the air above Ardorton Station, Candlerakk's Crag, and Hunter's Grotto. One quick way to farm them is to Fast﻿ Travel to Ardorton Station, where a spore can be found drifting down the slope. This has a chance of being a slagged spore, and will reset each time Borderlands 2 is relaunched. Two spores spawn at the bottom of the ramp from the other entrance to Ardorton Station, via run-in from Scylla's Grove, though it takes about 20 seconds of standing around by the tree.

The fastest way to get both spores and drifters is to get a fan boat and drive around Hunter's Grotto, after a few trips the spawn points become obvious, up high for spores in three places, and in the water for drifters.

"By killing those creatures for Thirstblood, you've continued your long-standing tradition of doing jobs for people you would otherwise shoot in the face. Well done!"

Turn In: Hunter's Grotto Bounty Board 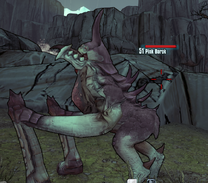 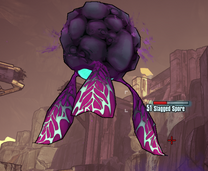 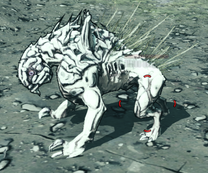 I Like My Monsters Rare
Retrieved from "https://borderlands.fandom.com/wiki/I_Like_My_Monsters_Rare?oldid=451215"
Community content is available under CC-BY-SA unless otherwise noted.