I've Got A Sinking Feeling...

I've Got A Sinking Feeling...

Jaynistown: Getting What's Coming To You

I've Got A Sinking Feeling... is an optional mission in Borderlands that becomes available after Jaynistown: Getting What's Coming To You is complete.

"The bandits have a new weapon. They've built three gunboats, and they're using them to stage raids along the entire coastline. It's got to stop. I'm putting up a bounty for anyone who'll go to Treacher's Landing and sink those things." 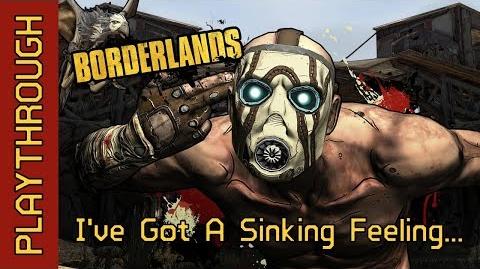 There are three gunboats moored around Treacher's Landing. Each ship can be quickly spotted by their sail with bandit emblems on them. The Righteous Man carries a sail depicting a cherub armed with a repeater and a grenade, the Great Vengeance sports a smiley faced bomb, and the Furious Anger has a dirty, cracked skull on display.

The boats can be quickly dispatched by shooting at the fuel tanks at the stern. Destroying the fuel tanks will cause an explosion that sinks the boat.

The gunboats are armed with Mulciber Mk2 gatling guns. The turrets' operators can be killed, rather than destroying the guns themselves, but invisible boundaries around the boats will prevent access, thus preventing the turrets from being commandeered for use by the player.

Because of the range and firepower of the Mulcibers, using sniper rifles can be an effective way of dealing with the boats. There are many elevated areas in Treacher's Landing providing unobstructed line of sight to the boats and their fuel tanks.

"Great, that should put an end to the coastline raids. Those bandits are resourceful bastards, aren't they? Turn your back for a second and they'll think of some other new way to kill you."