Hyperion provides New-U Station services and is one of the chief weapon manufacturers on Pandora. They manufacture submachine guns, combat rifles/assault rifles, repeater pistols, rocket launchers, shotguns, and sniper rifles. Hyperion weapons are made of dark pink, red, silver, or black metal of a sort and have greater accuracy and damage when compared to guns of similar levels.

The new Hyperion logo in Borderlands 3.

In Borderlands, Hyperion maintains a Claptrap manufacturing plant in the Dividing Faults. This location forms a pivotal plot point in the fourth DLC, Claptrap's New Robot Revolution when the Interplanetary Ninja Assassin Claptrap uses it to 'claptrap' many of Pandora's inhabitants and wildlife to further the cause of the robot revolution.

The Hyperion Vice President, Mr. Blake then arrives on the planet to personally take charge of a counter-insurgency operation, accompanied by a group of soldiers.

The opening of the Vault and the appearance of Eridium gained the attention of a Hyperion employee named Handsome Jack who utilized it for Hyperion's profits. After opening the Vault on Elpis, he decides to use the Warrior to cleanse Pandora of bandits.

After killing Harold Tassiter and destroying the Claptrap product line, Jack becomes the president of Hyperion. He then declares himself as the dictator of Pandora, intending to rule over the populace with an iron fist to eliminate "bandits", whilst also gathering Eridium to charge the Vault Key he stole from Patricia Tannis to unlock another Vault containing a powerful creature known as the Warrior, in order to secure his rule over the planet. He also maintains a facade when addressing everyone on Pandora, including his attempt to build the city of Opportunity and using the Hyperion Truth Network to spread propaganda. Jack is killed shortly after the Warrior is destroyed.

Hyperion has a corporate theme in Borderlands 2, with the theme of their weapon names being business buzzwords. The weapons having a sharp, angular appearance with their magazines inserted into the top of the weapon. The Hyperion weapon gimmick is "reverse recoil;" weapons start out with severe sway, but sustained fire causes them to increase in stability instead of decreasing. The listed accuracy on the weapon is what is achievable after the sustained fire increases their accuracy to maximum.

The Hyperion corporation and its CEO, a manipulative, charismatic narcissist named Handsome Jack, are the main antagonists in the game's plotline. Hyperion has extensive interests all across Pandora and has set up huge facilities to mass-produce loaders and harvest valuable Eridium ore.

The following are items made by Hyperion in Borderlands 2.

In Borderlands: The Pre-Sequel, there are two distinct sets of Hyperion weapons, "old Hyperion" and "new Hyperion", as a result of Hyperion undergoing a "transitional phase" during the events of the game:

What with the Dahl attack and Jack's impending rise, Hyperion is going through what a sweating PR shill might say is "a transitional phase." Look for different styles of Hyperion weapons built during this period.
—Loading screen tip

The two weapon sets share the same pool of weapon parts from various manufacturers, but have substantially different titles and prefixes. For example, a new Hyperion pistol named "Earnest Synergy" will have the same Vladof twin barrel and accuracy-enhancing laser accessory as the old Hyperion pistol named "Trustworthy Expeditious". Occasionally, a new Hyperion weapon may have old Hyperion naming or vice versa; the material (see below) is what distinguishes old- and new-style weapons.

New Hyperion weapons are essentially unchanged from those in Borderlands 2, except for the addition of laser weapons and the replacement of slag with cryo.

Old Hyperion weapons use materials similar to those used in the original Borderlands, with a primary reddish color and a white horizontal stripe. This reddish color darkens towards crimson with increasing rarity, although blue-rarity weapons are predominantly black carbon fiber with red accents. Both styles have the characteristic Hyperion "reverse recoil"; however, old Hyperion weapons have higher damage output at the cost of significantly lower accuracy and fire rate. (Lasers are an exception to this rule.)

The following are items made by Hyperion in Borderlands: The Pre-Sequel.

Hyperion firearms maintain their gimmick of reverse accuracy but now also have an energy shield on their weapons. These energy shields are brought up when aiming down the sights and can soak some hits separate from the body shield. The downside is that the shield only protects the front of the user and has to be recharged. The shields can have one of the following abilities: 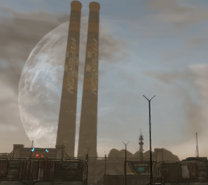 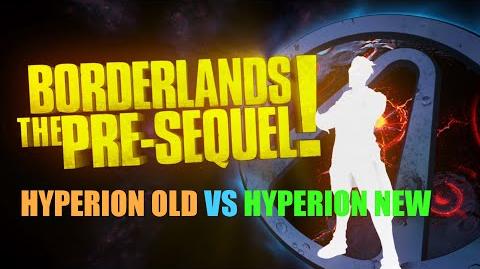