Hunter-Killer is a Wilhelm's first skill tree, and it is focuses mainly on increasing the firepower and deadliness of Wolf while also increasing Wilhelm's effectiveness while using elemental weapons. This tree also provides benefits to Wolf and Saint's duration and cooldown.

Wilhelm's other skill trees are Cyber Commando and Dreadnought. 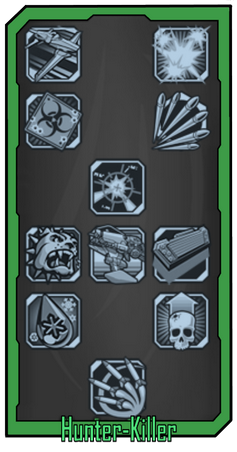 Retrieved from "https://borderlands.fandom.com/wiki/Hunter-Killer?oldid=431136"
Community content is available under CC-BY-SA unless otherwise noted.