Hungry Like the Skag is an optional mission in Borderlands 2 given by ECHO Recorder in Arid Nexus - Badlands. It becomes available after Data Mining is complete.

“A bandit named Carlo was mauled by skags who killed them, then devoured the pieces of his gun. On Pandora, this sort of thing happens more frequently than you might think. You will need to kill some more skags in order to find the missing parts of Carlo’s gun.”

Kill skags to find the parts of Carlo's gun.

When killing skags, one of them will drop an ECHO Recorder. Picking up the recorder activates the mission. Marcus then offers to assemble the Gun for the Vault Hunters if all parts are found. Any skag in anywhere has a chance to drop the parts.

"Given the frequency with which skags tend to drop the damned things, one has to imagine firearms taste like filet mignon to them."

Turn In: Fyrestone Bounty Board 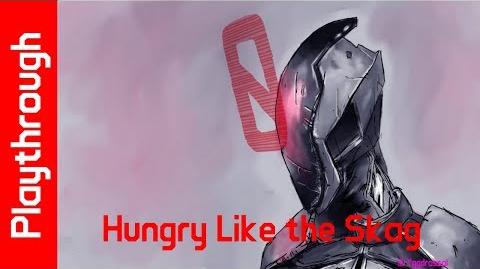