How Marcus Saved Mercenary Day is a Headhunter Pack for Borderlands 2. It is a winter holiday-inspired DLC that provides a new skin and head to unlock for each class and a small story culminating in a boss fight.

The DLC can be accessed by Fast Traveling to Marcus's Mercenary Shop, located within Frost Bottom, where the first mission will automatically begin. The level is set when first visited, but in Normal Mode is at least 15 and at most 35.

Marcus has recently sold a large shipment of guns, but it's gone missing. He enlists the Vault Hunters to search the nearby frozen town of Gingerton to find them. Along the way Snowman attacks become more common until finally meeting their leader, Mister Tinder Snowflake.

The DLC includes one story mission and a side mission.

Frost Bottom, a medium-sized winter environment, is the only new location for this DLC. The area is the location of Marcus's Mercenary Shop and the nearby village of Gingerton.

This pack reskins and renames several enemies from Borderlands 2.

And adds one original new enemy:

This pack includes a new head and skin for each class. The head is obtained as a mission reward from Get Frosty. The skin is obtained as a drop from His Adbominableness, Mister Tinder Snowflake, Esquire. The boss may need to be farmed as the skin is not guaranteed to drop the first time that it is defeated. 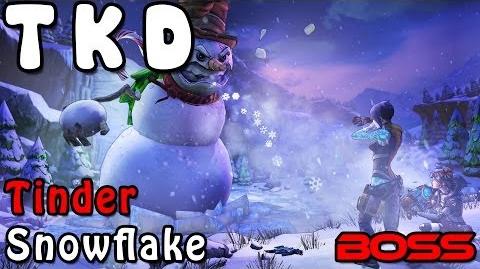 2. Gearbox - Get in the holiday spirit