House Hunting is an optional mission in Borderlands that becomes available on Middle Of Nowhere Bounty Board after Jaynistown: Cleaning Up Your Mess is complete.

"I live in New Haven, but I can't stand having a woman in charge anymore. So, I found a nice bit o' waterfront property out in the Trash Coast. Trouble is, there's a bunch o' them scythid whatever-the-hells hanging around outside, including a really tough one I called Bleeder. Kill them scythids, especially Bleeder, and I'll be able to get the hell away from this place." 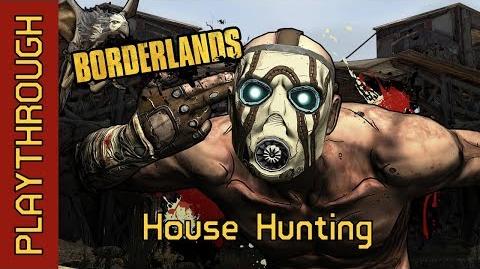 Go to the Trash Coast and kill Bleeder.

Bleeder is found in the lower portion of the Trash Coast map. From the transition point, down the eastern side under the overhead pipeline.

It is best to deal with the lesser scythids first and then focus on Bleeder himself. He does not deal much damage but has a rather large amount of health and is constantly moving which makes him difficult to kill. Go on top of the pipeline that the Claptrap repair kit is retrieved from. If done properly, Bleeder will not surface until the player is on top of the pipeline, and will not move around at all, allowing for an easy kill. Scythids are usually weak against melee attacks as well. This makes the use of melee attacks a viable, albeit more dangerous, tactic to quickly defeating Bleeder.

"Cleared out my new digs, eh? Thank you, stranger! I'm out o' this cesspit. To hell with these New Haven liberals and their 'woman in charge.'"