Hot Head is an optional mission in Borderlands: The Pre-Sequel.

"This guy's more steamed than a vegetable. Or a twelve year old on ECHOnet Live."

Upon accepting this mission, a cryo-elemental Maliwan Pistol is provided as a mission weapon.

Dean can be found inside a locked closet in the World of Shopping area in the northern part of the Hyperion Hub of Heroism. A switch on the wall to the left of the door will open the closet. Beware that though Dean is not armed, the Lost Legion soldiers nearby may pose a threat to the Vault Hunter.

The objective instructs the character to talk to Dean, who refuses to give in and continues ranting. At this point, the character needs to attack him with a cryo weapon, which freezes him into an ice statue. Once done, the character can turn in the mission.

"Good thing you were able to nip that in the bud." 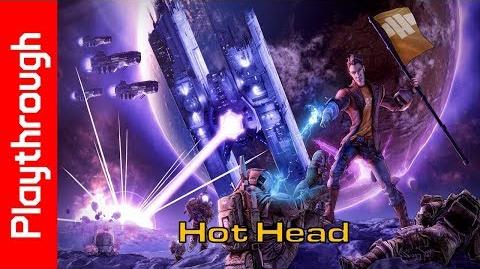