For the skill, see Helios (Maya).

Helios is the Hyperion moonbase of operations within Pandora.

Styled as a letter "H", the Helios moonbase is a colossal space station that was built after the events of Borderlands. After its completion, Handsome Jack moved Helios to orbit above Pandora's moon Elpis. During Borderlands 2, Handsome Jack spends much of his time on Helios, conversing with the Vault Hunters through ECHO. In any outdoor location, Helios can be seen in the sky. The moonbase manages to stay in a perfect luna- and geostationary orbit between Pandora and Elpis, allowing it to keep its eye trained on Hyperion operations at all times.

Helios is capable of launching orbital assaults known as moonshot blitzes which are capable of devastating the target areas, and can also send a ground assault almost anywhere by launching loaders and constructors. Its most powerful weapon is "The Eye of Helios", a massive laser consisting of multiple smaller lasers to destroy almost any landscape where it is fired at. It is powered by the eye of The Destroyer, the creature that was released and killed during the opening of the original Vault.

Supplies may be called in from Helios. Hyperion ground forces set up a supply beacon at a drop site to requisition said supplies, and the supplies are delivered in cargo containers in the same manner as the blitzes. The supply beacons can be used to requisition everything from equipment to Fast Travel stations. Although the latter will first have to be calibrated by the moonbase staff before they can function, they will immediately become operational once they land. Two known supply drop sites include the Orbital Delivery Zone in Opportunity and the Extraction Plant at The Highlands - Outwash.

In Borderlands: The Pre-Sequel, Helios is still under construction but is functional. Jack, then a low-level programmer for Hyperion, is put in charge of supervising the construction, but Helios is invaded by the rogue Lost Legion led by Colonel Zarpedon and he is forced to evacuate for the time being. As Zarpedon begins using the Eye of Helios to destroy Elpis, Jack gathers a team of Vault Hunters and a robot army to retake Helios. When Jack and the team kill Zarpedon and has the laser shut down based on Moxxi's advice, Moxxi destroys the laser in an attempt to kill Jack and his team.

Helios is fully completed by the events of Borderlands 2. In the time since the first Vault on Pandora was opened, Hyperion had been fighting the Crimson Raiders led by Roland for control of the planet. The Raiders' headquarters was located in the city of Sanctuary, which had to be reinforced with a shield generator to protect it from moonshot blitzes from Helios. The generator draws its energy from power cores that burn out periodically, requiring replacements that force the Raiders to venture from the safety of the city to seek. During the mission The Road to Sanctuary, the Vault Hunters deliver a new power core for Sanctuary's shield generator just before Helios launches another blitz, sparing the city from what would have been a devastating attack.

During A Dam Fine Rescue, Helios delivers W4R-D3N and a large force of loaders to the Bloodshot Stronghold to capture Roland while also wiping out the Bloodshot gang.

Later, when the Vault Hunters defeat Wilhelm, they retrieve a unique power core from his remains that could theoretically sustain Sanctuary's shields indefinitely. When installed in the generator in Rising Action, however, the core is revealed to be a Trojan horse that allows Angel to infiltrate and disable the shield's systems, rendering Sanctuary defenseless. Helios then begins a heavy bombardment of the city, killing many of its inhabitants before Lilith uses her powers to phase the city to the Highlands and out of the moonbase's range.

During Bright Lights, Flying City, Angel attacks Helios when the technicians on board delay establishing a Fast Travel link with a terminal the Vault Hunters deploy in Overlook. In order to expedite the Fast Travel request, Angel deactivates the life support as a death threat, which shortens the time for the request from three to six weeks to a few minutes.

During Tiny Tina's Assault on Dragon Keep, Brick, Lilith, and Mordecai play a game of "Bunkers & Badasses" with Tiny Tina while the six other Vault Hunters "interrogate" a Hyperion spy for Helios's access codes. After the game is finished, Maya informs the group that the spy has finally divulged the codes and asks if they feel like blowing the moonbase up.

In Tales from the Borderlands, Helios is still functional after the death of Handsome Jack and his mining operations on Pandora remains in full operation for the Hyperion corporation. It sends several moonshots to the planet's surface, transporting Rhys and Vaughn in a car, and a loader shortly thereafter. In the wake of Handsome Jack's death, Hyperion has entirely evacuated Pandora of its remaining employees and military forces, but Helios continues to monitor the planet and its inhabitants.

Helios makes a major appearance in the fourth episode, Escape Plan Bravo, in which Rhys, Fiona and crew infiltrate Helios to steal the last piece of Gortys located in Handsome Jack's office. In the episode it is revealed that Helios has changed little since the events of Borderlands 2, aside from security measures being increased. After the final piece of Gortys is taken, the crew is ready to leave, but Handsome Jack's AI offers Rhys a promotion to president.

The fifth episode picks up where the fourth left off which Rhys is now president of Hyperion (whether he rejected it or not). After making a "major" decision, Jack reveals his plan to turn Rhys, Hyperion and the whole of Pandora into a Jack army using robotic endoskeletons. Rhys ultimately lashes out at Jack and manages to escape but Jack is still in full control of Helios. Rhys can choose to rescue Yvette or leave her to die and quickly realizes that the only way to stop Jack is to shut down Helios's power. Rhys journeys to the core of Helios and shuts down the system. This, in turn, eliminates its power source and the station starts to crash into Pandora. Employees of Hyperion, tourists and Vault Hunters run for the escape pods, but not everyone makes it out alive.

Helios collides in the desert with the moonbase scattered all around. Handsome Jack's AI is removed from the system and Rhys makes the decision whether or not to destroy him. Rhys and Fiona go their separate ways shortly after the death of Gortys. Vaughn, who stayed on Pandora back in episode 4, sees the wreckage of Helios. The employees of Hyperion notice his knowledge of Pandora and declare him the leader of Hyperion, which transitions from moon corporation to Pandoran bandit tribe. Civilization is built on the wreckage of Helios. Airlocks become back doors while coffee rooms become hospitals and kitchens. Rhys is seen as a savior in the tribe and statues are dedicated to him since he was the one who broke Hyperion employees from their corporate shackles.

In Commander Lilith & the Fight for Sanctuary, the wreckage of Helios is taken over by New Pandora after killing or mutating the Hyperion survivors with their Paradise Gas, and the remaining Loader bots are hacked by them to further fortify their position. In order to get into the Mt. Scarab Research Center, the Vault Hunters, Lilith, and Tiny Tina arm the moonshot cannon to fire an explosive mortar with the force necessary to destroy the tritanium blast door blocking access. Further exploration of Helios reveals a prototype version of Angel's chamber, which is destroyed after downloading pertinent information regarding Jack's Siren research, and the VIP Stables where New Pandora holds Jack's diamond pony Butt Stallion captive. 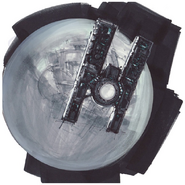 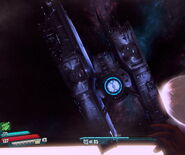 A partially constructed Helios in Borderlands: The Pre-Sequel

The wreckage of Helios in Borderlands 2

The wreckage of Helios in Borderlands 3