Hayter's Folly is an area in Captain Scarlett and Her Pirate's Booty DLC in Borderlands 2.

Aquanexus is a large cave with a pond and a number of waterfalls. It is located in the central part and connects various parts of the area. It is inhabited by cave crystalisks and skags.

Grendel's Den is the lair of the unique bullymong named Grendel. The den is a large, mostly cylindrical cave with several massive piles of metallic debris and still operating electrical signs surrounding the outer rim of the cavern, and another single pile in the very center. The area itself is the northeast portion of Hayter's Folly. The den is, at first, only accessible through the Aquanexus, but upon the defeat of Grendel, a wall collapses that leads to the Hayter's Folly entrance area near the vending machines and the fast travel station. After Grendel's death, a couple of cave crystalisks will take up residence in the den.

Hot Spring Hideout is a pirate stronghold populated by most of Sandman's men. On one side are a series of thermal pools and around the periphery a series of catwalks and huts. There is one bandit turret in a position above the pools that offers a commanding field of fire over most of the chamber. A Dahl weapons chest is hidden under a catwalk near the turret, and two pirate chests concealed in a short tunnel beneath the entrance to the area.

Sandman's Overlook is a lookout post above Hot Spring Hideout. Here Sandman has kept a telescope with a view out over the hideout, although this has been trained on a poster of Captain Scarlett across the cavern. A red pirate chest is positioned just out of sight off to one side of the stairs down to the viewing platform.

Master Gee's Arena is a sealed-off area located in the northwest portion of Hayter's Folly. It becomes accessible once the Master Gee the Invincible mission has been accepted. 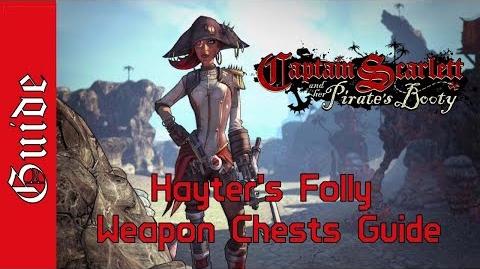 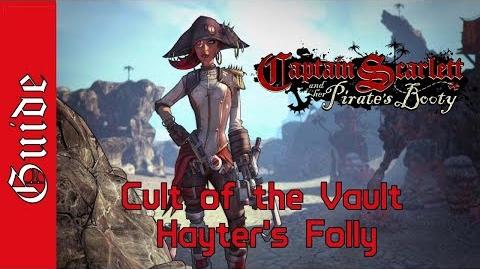 BL2 Hayter's Folly Cult of the Vault Guide
Retrieved from "https://borderlands.fandom.com/wiki/Hayter%27s_Folly?oldid=432778"
Community content is available under CC-BY-SA unless otherwise noted.