Hatred's Shadow is a location in Tiny Tina's Assault on Dragon Keep. It is a mountainous, rocky environment with caves and cliffside ledges in its lower reaches and crowned with fortifications on top.

Hall of Hyperion is an area past the Horizon's End. There is a large main room with a fountain in the center and two smaller side rooms. This area is heavily defended by several waves of knights and wizards. Several shrines around the fountain can be used if need be. There is a heavy metal fence blocking the exit at the far end. The fence will only rise once defenders in the main room are defeated. All three types of vending machines can be found in a room past the fence.

The Handsome Bridge is an empty, open span leading to the Lair of Infinite Agony. It is uninhabited aside from the Handsome Dragon which spawns during the mission and each visit after the mission is complete, A Game of Games, and the dragon's offspring.

Nefarious Battlement is the topmost section of the castle. It is heavily defended by knights and wizards. Several unassuming chests and large number of other lootable objects are scattered around the area. There is an elevator going all the way down to The Pit.

The Pit is the first area past the castle gates. It is rather crude dig in the surrounding rocks with a large piece in its center. This area is heavily defended by Orcs.

Throgmuk's Precipice is at the lowest point in Hatred's Shadow. This area is a rocky, barren environment populated by orcs. 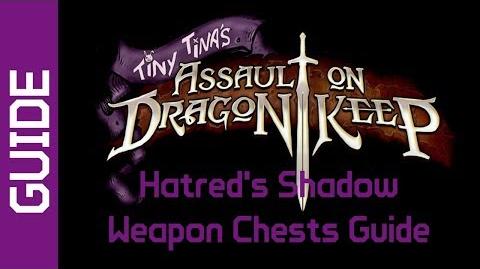 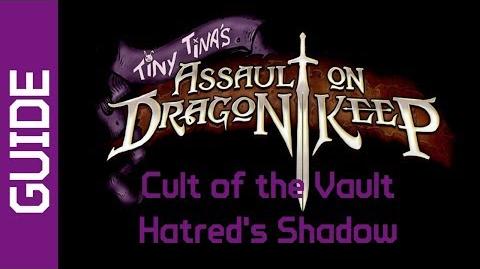