Hank Reiss is a wereskag encountered in Generally Hospital during the mission There May Be Some Side Effects... in the DLC The Zombie Island of Dr. Ned.

Hank Reiss is one of the test subjects whom Dr. Ned was testing an anti-zombie antidote on. The antidote was based on skag DNA and did not work as planned. In the past, before his fatal involvement in the Jakobs Cove "incident", he had a caring wife and daughters whom he wanted to spend a 'new life 'in the Dahl Headlands with, so he started working for Jakobs. It was perfect until rumors started with people in the cove "seeing the dead walk" (as said in his echorecordings). He started becoming worried until he met a man named Dr. Ned. At that time, the rumor proved to be true. Dr. Ned claimed he could cure the residents of Jakobs Cove with an antidote derived from skags, which "don't have undead tendencies". Hank Reiss placed his faith in Dr. Ned and volunteered to be administered the cure, which inadvertently turned him into the wereskag he is now.

He has the usual boss attacks, slam, knockback, melee. He has a fair amount of health, and has the regeneration and berserk ability of all other Wereskags. Like all Skags and Wereskags, his weakness is his open mouth when he roars.

It is possible to empty an entire clip of an incendiary gun - prime example would be a Hellfire - into Hank Reiss and kill him before he can hit you with his charge. Otherwise, just fight him like you would a normal Skag.

Simplest way to kill him: just get out of the fences and use the fence as a barrier while you can shoot at him to his death. 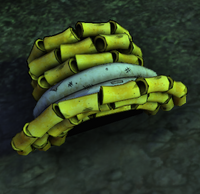