Start a Wiki
watch 01:57
Who is Handsome Jack?
Do you like this video?

Handsome Jack is the main antagonist of Borderlands 2, and the deuteragonist of Borderlands: The Pre-Sequel. He has taken over the Hyperion corporation, declared himself dictator of Pandora, and stolen all of the credit for finding The Vault, going so far as to claim responsibility for killing The Destroyer. A new team of Vault Hunters is tasked with killing Jack and restoring (relative) peace to Pandora.

Jack's father died when he was young and his mother left him in the 'care' of her mother Jack's grandmother, who was (at a minimum) physically abusive towards her grandson. The emotional trauma from these events was strong enough that as an adult Jack had his grandmother murdered, and no doubt contributed towards his mental decline.

Later in life Jack married and had a daughter, Angel, one of the universe's rare Sirens. During Angel's youth, he trapped her in Control Core Angel in order to use her to control Pandora's ECHOnet and to open the vault of The Warrior. In the Borderlands 2 story mission Data Mining, Handsome Jack says that "I know you think I'm a monster. You think I enslaved Angel. But you didn't see what she did to her mother. I had to restrain Angel's power. You get that? I had to." The seeming implication is that Angel caused her mother's disappearance. However, this interpretation contradicts the journals in Get to Know Jack. While it is true that the third journal says that Jack's wife disappeared, it also says that Jack's wife suggested that "the Angel" be shut down. For there to be something to shut down, Control Core Angel must have already been active at that time, and therefore Jack's wife's disappearance could not have been the reason for the creation of Control Core Angel. Nor could whatever Angel "did to her mother"--if indeed anything happened at all--have been serious enough for her mother to agree with restraining Angel. A conversation in Tales from the Borderlands explains this discrepancy by clarifying that Jack remarried at some point after the death of Angel's mother, and that it was his second wife who wanted the "Angel Project" shut down and who left him over it.

Following Angel's death, Jack makes his first physical appearance in the story and kills Roland. Lilith attempts to attack him, but Jack throws a Siren power-restraining collar at her neck and captures her to replace his recently-deceased daughter as a catalyst to charge the Vault key. He rescinds the bounty on the Vault Hunters, vowing to exact vengeance himself for Angel's death, and threatening to hunt down anyone who kills the Vault Hunters before he does.

When Rhys attempts to use Professor Nakayama's ID drive to track the money he lost, he collapses onto the floor, and hears a mysterious voice claiming to be disappointed at how Rhys is trying to follow in "[his] footsteps". Later, while infiltrating the abandoned Atlas warehouse, Rhys tries to get the lift operational, but fails as his system suddenly runs into glitches. The mysterious voice once again taunts him. After Bossanova is killed by Zer0, Rhys and the gang (Fiona, Vaughn and Sasha) discover a secret room containing Atlas technology, including information about a "Gortys Project". The voice then begins to get clearer inside Rhys' head, and is then revealed to be the voice of Handsome Jack, who then appears behind him as a hologram. Rhys initially suspects Jack is indeed just a hologram, though he soon shows he is self-aware and active; however, at first Jack does not realize nor believe that he is dead. He tells Rhys to bring him back to Helios so he can be transferred into a new body, allowing them to run Hyperion together (but "mostly [Jack]" will control it). Jack later upgrades Rhys' Echo-Eye implant to give him the ability to hack into machinery and control it at his will. When Rhys and Fiona finally discover the Gortys Project's location, they are attacked by numerous sentry drones, which Rhys can use for his assistance against Vasquez and August. If so, Jack will take control of them by merging his consciousness into Rhys'. 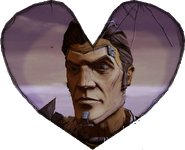 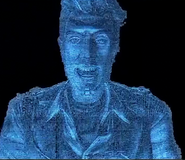 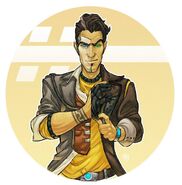 Retrieved from "https://borderlands.fandom.com/wiki/Handsome_Jack?oldid=458863"
Community content is available under CC-BY-SA unless otherwise noted.