Hair Of The Dog is a story mission in Borderlands. Crazy Earl refuses to hand over the vault key unless he gets the booze.

"One more thing. I'm all outta booze. You wanna get my alien whatsit? You're gonna go pick up a new supply from the bandits out at Treacher's Landing. They brew a mean moonshine out there. Don't know what's in it, but who cares? Those bandits don't part with it willingly, of course. That's why you're going, and not me!" 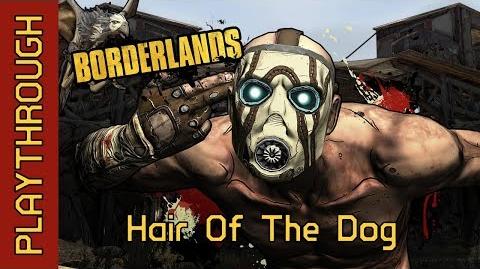 Collect Bottles Of Booze from the bandits at Treacher's Landing.

Treacher's Landing is located at the southern end of Rust Commons West. The closest Fast Travel station is at the Outeryard. The bottles drop off every bandit killed so make sure to loot everything. The way point doesn't really lead anywhere, but gives a general location. Just kill a lot of enemies and loot, loot, loot. Fast Travel back to Crazy Earl's Scrapyard for a reward.

"Thanks for the booze! Now, about that alien whatever-the-hell. Funny story. Krom heard about it and stopped by about a year ago. Gave me an offer I couldn't refuse. Why do you think I barricaded myself in here? I don't know why he wanted it, but I wasn't about to argue. That's the last I saw of it."