The H.S.S. Terminus is a derelict Hyperion ship that crashed in Candlerakk's Crag. The Terminus has since become Professor Nakayama's base of operations on Aegrus.

The ship's armory is a large room packed with lootable objects and a pair of non-functional constructors. There are thirteen red Hyperion weapon chests, further supplemented by various yellow weapon lockers, ammunition boxes and storage cabinets. The Armory provides exceptional loot, typically above average. Adjoining the laboratory, the only way out is to use crates as stairs to reach the ledge above.

Note that this area can only be entered once for the mission, making multiple visits impossible. With the main gate closed by an energy field, Gearbox assumed players would attempt to use exploits to re-enter for the loot. If the player attempts to use exploits or map abuse and finds a way inside the Armory, the player will hit an invisible “death wall” that will instantly put the player into Fight For Your Life.

Nakayama's laboratory is a room with boxes and other equipment strewn about. There is little of interest besides a Hyperion storage box and a Fast Travel exit.

Just inside the entrance to the Terminus is a low corridor leading to a drop into a huge open-floored cargo bay with a grassy bottom. There are a pair of Hyperion ammo digistructors in this chamber and an inaccessible door at the far end. The cargo room is home to Nakayama's bodyguard creation Jackenstein. 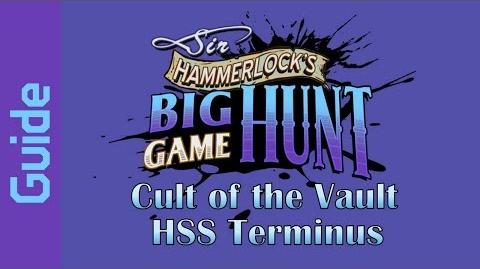