Shock, Incendiary, Corrosive, Cryo, or None

Gwen is kind of a strange girl. – Fires a 6-round burst when zoomed. Fires 2 projectiles at once at a cost of 2 ammo; one projectile fires in a straight line, and the other fires at an angle to the left. Has a 37.5% multiplicative critical hit bonus.

Gwen's Other Head is a powerful handgun, both in terms of raw power and DPS potential. The build-in "double" effect allows the handgun to put a surprisingly large number of bullets downrange in a very short amount of time; further, Gwen's Other Head enjoys a multiplicative crit bonus, of the same type that Jakobs weapons employ, meaning that it will dramatically increase the effectiveness of any normal (additive) crit bonuses that a Vault Hunter might have.

However, Gwen's Other Head is not without drawbacks. The weapon is very difficult to use effectively outside of short range, as the secondary projectile is fired at a fairly wide angle; thus, if used against targets at long range, it waste large amounts of ammunition. Even so, against enemies with large critical locations (such as the Empyrean Sentinel), the Gwen's Other Head can be a terrifyingly effective instrument of destruction. 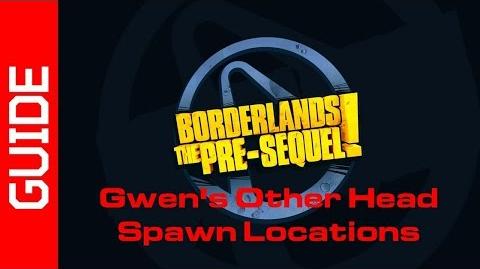 Gwen's Other Head Spawn Locations Guide
Add a photo to this gallery
Retrieved from "https://borderlands.fandom.com/wiki/Gwen%27s_Other_Head?oldid=484315"
Community content is available under CC-BY-SA unless otherwise noted.