Grinders is an optional mission in Borderlands: The Pre-Sequel. It unlocks the Grinder, a machine for converting unwanted items into more useful ones.

Janey first sends Vault Hunters in search of a Grinder Buggy patrolling the southwest area of Triton Flats. When destroyed, it drops one of the grinder pieces Janey needs to repair "Bessie". The Grinder Buggy behaves like a standard enemy buggy that fires missiles.

The next piece is in Stanton's Liver. Janey wants this part retrieved from the scavs there. There is an optional objective to refrain from asking nicely, and simply killing them suffices.

Partway through the area, the leader of the local scavs, Rooster Booster, announces himself and taunts the Vault Hunters. The part in question is at the other side of the area, on the roof of the St. Pancreas train station. When the device is hit, it doesn't yield, but Rooster Booster appears - a badass scav. When killed, he drops three explosives and a detonator. The explosives are then set on the device and detonated from a safe distance, leaving the recombulator behind.

Back in Concordia, the grinder is then repaired by inserting the two parts, and then a demonstration of its use ensues when Janey offers three common assault rifles to put into it and grind.

"Back to the daily grind! Okay, really done this time. Swear." 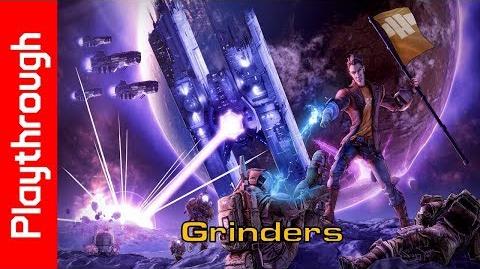 Grinders
Retrieved from "https://borderlands.fandom.com/wiki/Grinders?oldid=416639"
Community content is available under CC-BY-SA unless otherwise noted.