For other uses, see Grenade (Tediore) and Grenade Mod. 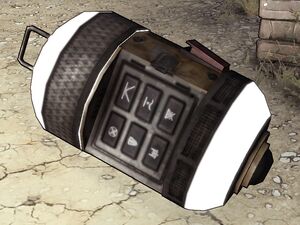 Protean Grenades, frequently shortened to simply Grenades, are first acquired after speaking with T.K. Baha to receive the mission Got Grenades?, which requires the purchase of some. This in turn opens up ammo and weapon vendors. Grenades can be bought at ammo vendors, found in chests, or found after they are dropped by enemies. Like all ammo types, grenade capacity can be upgraded by buying the appropriate SDU's from the ammo vendors throughout Pandora.

At the outset, grenades do rather low damage and detonate a few seconds after throwing. Later in the game they can be modified by a wide array of grenade mods which increase their damage and grant various effects and elemental properties.

Proficiency does not apply to grenade attacks. Any experience gained by a grenade kill is applied to the class of the weapon currently wielded.