Greater Good is Jack's second skill tree out of three. This skill tree focuses primarily on Digi-Jacks and teammates dying and taking damage while Jack avoids it. Additionally, it grants his Digi-Jacks a stronger close-range game via shotgun lasers and several area-of-effect attacks upon spawning or dying. His other skill trees are The Hero of This Story and Free Enterprise. 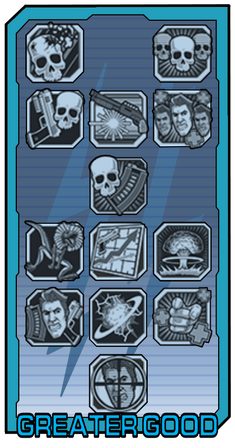 Retrieved from "https://borderlands.fandom.com/wiki/Greater_Good?oldid=423330"
Community content is available under CC-BY-SA unless otherwise noted.