For the enemy in Borderlands 2, see Goliath.

Goliaths are an enemy type in Borderlands 3. They are first encountered at the Jakobs Manor on Eden-6 and appear in COV enemy groups from then on.

Similar to their previous rendition, Goliaths dual wield assault rifles. They initially speak in a dopey voice with poor grammar and become enraged when their helmet is shot off. Their transformation is more dramatic in this game, with their bodies pulsing while their muscles grow to large sizes while an eerie violin noise is heard. They will also heal when they begin to transform, rather than at the end of their transformation as in Borderlands 2.

Goliaths now appear more heavyset, with a large belly that wobbles about as they move. When not enraged, Goliaths can put out significant damage with their weapons at a distance, even when compared to their enraged forms. When enraged, they will resort to melee combat—a punch from a Goliath is capable of sending enemies flying as a ragdoll. However, their pathing has been made less consistent, as they may not be able to follow up with punches after an enemy is ragdolled, and may end up running in circles if there are too many enemies to target. They will also stick close to their spawn point unless the character constantly fires at them.

Enraged Goliaths return with standard punches and leaps, and have an array of new attacks:

The names of the Goliaths differ depending on their type. But they all follow a similar sequence: 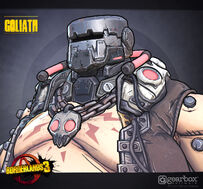