The Goliath is an enemy type in Borderlands 2. They are first seen in Frostburn Canyon, and can be found in many other bandit encampments from then on.

Goliaths wear a large metallic helmet that controls their rage and typically dual-wield large assault rifles in combat. However, Badass Goliaths typically wield a single large minigun, while Caustic Goliaths dual-wield melee weapons. The helmet can be shot off, at which point the goliath will go into a rage, regenerating all lost health (the rare shielded goliath will not have his shield restored), casting his guns aside and charging his foes, attacking with powerful melee strikes. During a rage, the goliath will attack everything in his range, friend and foe alike. Goliaths that lose their helmets lose all of the dopiness in their voice and begin to speak in more violent, complex, and complete sentences. Goliaths start out level-scaled to their area and can level up four times from their starting level. Once their helmet is shot off they become a "Raging Goliath" (with some name variation depending on the Goliath in question's original type). When they kill one target they become a "Badass Goliath"; two more kills, a "Super Badass Goliath"; three more kills, an "Ultimate Badass Goliath". After four more kills, it levels to a "GOD-liath" and killing the goliath in this form will unlock the "Goliath, Meet David" achievement.

A goliath's exposed head is malformed and seems to blend into the top of their torsos. When one flies into a rage, his skull bursts up and out of his distended mouth as his spine reforms into a stalk above his body. The high critical hit damage accrued from shooting the skull is offset by the difficulty of hitting the small, waving target.

Upon leveling up, goliaths will recover all lost health and become physically stronger. While this makes them significant threats, a beneficial aspect of this is that goliaths will add triple the XP to their own values upon killing an enemy, and will also drop much better loot upon death. At the GOD-liath level, drops are greatly increased in value, to the point where he will almost always drop Eridium along with items of blue quality or higher.

Once a goliath rages, they gain three ways of attacking. The first and weakest is a series of quick punches that will knock back even very heavy enemies but deals a moderate amount of damage. The second type of attack is when a goliath leaps a considerable distance before landing on a target and dealing medium AoE damage. Goliaths also use this technique to get to unreachable locations or to engage slow air units and are capable of jumping ridiculous distances. The third and final attack is their slowest, but also their most dangerous, a goliath will raise his arms into the air before slamming the ground, dealing tremendous damage in a large radius. It is worth noting that the ground slam is easily read and slow to wind up but can put a Vault Hunter into Fight for Your Life in a single hit (barring health gating), especially once they get to Super Badass and above. A Caustic Goliath will rarely use melee hits, opting to use their short-ranged vomit attack, making them easier to deal with compared to the regular goliaths.

Goliaths can be used both as a distraction and as a way to save ammunition, so long as the proper weaponry is at hand to take care of a raging goliath. It is also vital to pay attention to where the goliath is at all times and start attempting to kill him once he reaches Super Badass. It is possible for a goliath to gain enough levels to gain a skull by their level and become a greater threat than any other enemy in the area.

The names of the goliaths differ depending on their type. But they all follow a similar sequence:

The actual possible outcomes are:

Hit with a critical - Normal

Going into a rage

Raging - upon leveling up

Hit with a Critical - Raging 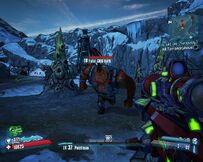 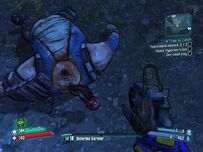 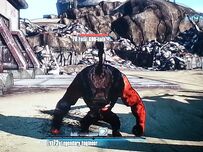 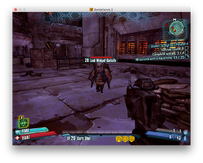 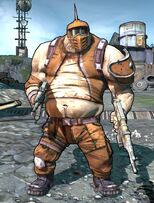 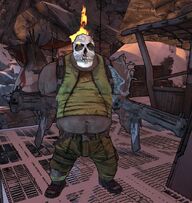 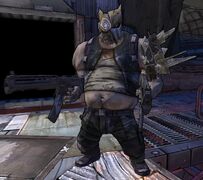 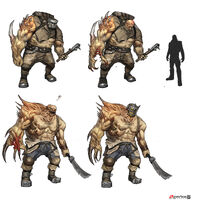 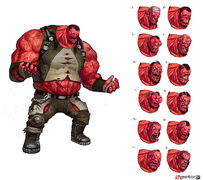