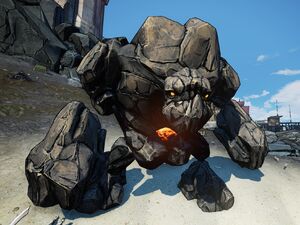 Golems are sentient rock-beings that are encountered in the DLC Tiny Tina's Assault on Dragon Keep.

Golems are large, powerful creatures, being animated from stone or metal. They are capable of great bursts of speed and are also capable of dealing heavy damage. The most common golem is the Rock Golem, but there are also more powerful golems crafted from metal.

Golems can raise in level by killing other enemies, much like Goliaths. In order to activate the golem's level up mode, the glowing core at the center of their torso must be destroyed. Once this occurs, its name becomes prefixed with "Unbound" and the golem will fly into a rampage and attack anything around it.

At Overpower level 8, a Badass Iron Golem will spawn at level 82 in the Mines of Avarice. Once unbound, it will begin to level up by killing the surrounding Orcs, spiders and dwarfs. It will rank up via the following prefixes:

Ground-based golems are generally sluggish in their movements, but can accelerate to high speeds and have an impressive jumping ability. Assuming that the bulky, humanoid golems are primarily a threat at close range could be a mistake as all golems possess ranged attacks: searing energy beams in the case of Aerial Golems and thrown boulders and fireballs from their rocky kin.