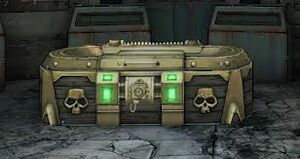 The Golden Chest is a unique lootable object located at Sanctuary in Borderlands 2, and at Concordia in The Pre-Sequel and is opened by using a Golden Key. When the chest is opened it will spawn purple weapons, class mods, shields, and grenade mods. E-tech weapons as well as blue and purple relics can also spawn in the chest. After all of the items are collected, the chest will close. A player with more Golden Keys available can open the chest again for more loot.

Retrieved from "https://borderlands.fandom.com/wiki/Golden_Chest?oldid=427058"
Community content is available under CC-BY-SA unless otherwise noted.