Such a Cod Finger. – Increased weapon zoom. Decreased damage and rate of fire. Generates new pellets the longer the bullet travels, up to 14x damage.

The Godfinger's special effect makes it primarily effective in long-range combat. The weapon damage increase is based on the projectile travel time, as each bullet spawns additional projectiles every fraction of a second. The first 9 pellets spawn at even intervals; at maximum range, a final 4 pellets are added at once, making a maximum pellet count of 14.

Like other guns with split projectiles, the split depends on time, not distance. This means investing into skills such as Zer0's Vel0city or Maya's Accelerate will lengthen the distance necessary to achieve maximum weapon damage.

The Godfinger's additional pellets aren't listed on the item card, making this gun work especially well with an Amplify Shield. 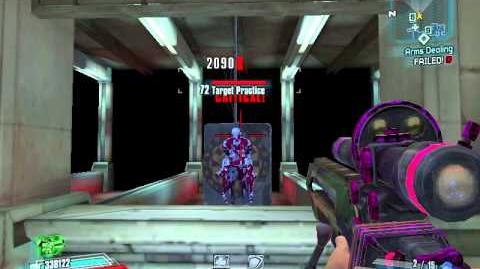 Retrieved from "https://borderlands.fandom.com/wiki/Godfinger?oldid=450699"
Community content is available under CC-BY-SA unless otherwise noted.