Ghosts of the Vault

Ghosts of the Vault

Ghosts of the Vault is an optional mission in Borderlands that becomes available on Lucky's Bounty Board after Powering The Fast Travel Network is complete.

"This is Tannis. I was digging in the Dahl Headlands, and came very close to uncovering an Elemental Artifact, most likely from the Vault. I was forced to abandon the dig when my brain-dead team quit. They said they saw ghosts, or Bigfoot, or something. If you're someone who isn't a superstitious dolt, I invite you to recover the artifact for yourself. Here's the freight lift code so you can access the site." 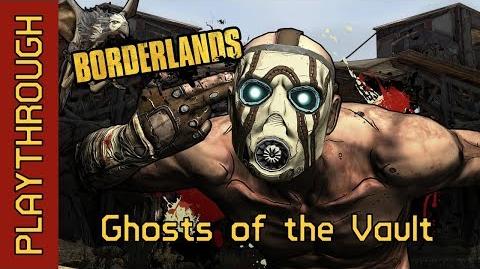 Visit the Haunted Excavation and recover the Elemental Artifact.

This mission takes place inside the mountain in the middle of the Dahl Headlands. The subterranean chambers must be accessed by way of an elevator that is guarded by several bandits aboveground at the top, as well as several more near the bottom who are retreating from some "ghosts" when the elevator reaches the bottom. A weapons and health vendor is also here, allowing you to restore lost health if you need to.

Venturing into the passage takes one past some grisly bandit corpses to an expansive cavern with two large statues in the middle. When approached, the statues start to turn, at which point a Guardian Spectre and two Guardian Wraiths will spawn and attack. They have powerful shields but are not particularly high in health, so using shock elemental damage on them is very effective. Upon killing the Guardian Spectre, it will drop a weapon, grenade mod, shields or a random level 2 Eridian artifact.

The mission is turned in at the far end of the cavern and rewarded with a new level 2 explosive artifact.

"You have discovered the Elemental Artifact which Tannis spoke of. She won't mind if you keep it for yourself, right?"