Getting Lucky is a story mission in Borderlands given by Ernest Whitting. It is first mission running in the Dahl Headlands.

"You showed up at just the right time! Bandits decided to lay siege to the Last Chance Waterin' Hole to the south, and my friend Lucky is trapped inside! He called me for help just before you showed up. I wasn't sure what to do, but you're here now. Please, go help my friend!" 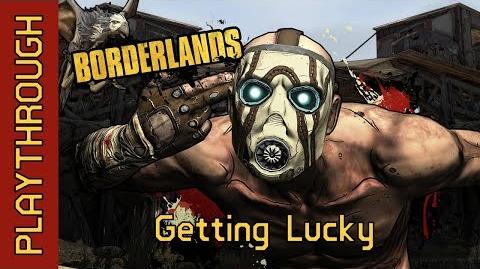 After reaching Ernest, he states that Lucky has been taken captive at a nearby town. There are two general areas to clear in the town, with the second being opened when it is reached. There are numerous bandits within the fence. Upon reaching the building and opening the door to where Lucky is being held, a Badass Bruiser will ambush anyone approaching the door. Once the badass is killed, it is a simple matter to enter the building, open the cell door, and find Lucky.

" Thanks, man. You really saved my bacon there. We really need to do something about these bandits. They're like drunk, pissed off hornets now that Sledge is dead."

"Hey huh, you know, Lucky's an old buddy of mine. And, huh, by "old buddy" I mean asshole that ruined my mom's girl parts. Sounds like he's in trouble, so you go on ahead and try and keep him alive long enough so I can kill him at a later occasion."

"Hey uh, hey, thanks for keepin' that dickbag alive for me to pound on later. Much as it pains me to admit, Lucky knows the area better than anyone. Might wanna use him whilst he's alive from me not having killed him and all."