Get Some Answers is a story mission in Borderlands given by Patricia Tannis.

"Tannis has betrayed you. Who knows what motivates that babbling bitch, but it's a sure bet she's fled her dig site. It's time to take back your Vault key and get some answers. First, you'll need to figure out where she's hiding." 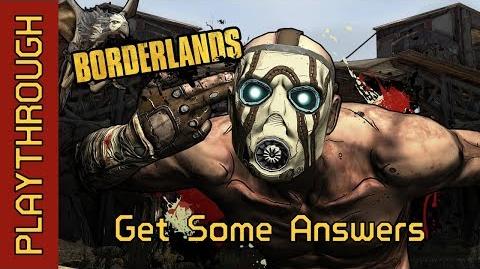 Find Tannis, wherever she may be.

Get Some Answers is obtained by accessing a white chest that rises up through the deck of Thor after Baron Flynt is killed. From the Salt Flats follow the compass waypoint to The Backdoor at Thor Cave.

The Backdoor is a winding tunnel network inhabited by numerous spiderants. These will ambush at various stages along the length of the cave system. A save point and weapons cache is located towards the end of the tunnel and two more red chests and an ammo vendor mark the last sales and resupply point before a final boss fight. (Although, it is actually possible to grenade jump back up.)

The final encounter in the Backdoor is accessed by dropping down into a cramped cage enclosure and accessing a data recorder found there. This will cause the cage to lift away revealing a storage warehouse littered with a number of wooden crates. Shortly after entering this chamber Master McCloud and two of the Lance Royal Guard will attack.

Master McCloud uses an Eridian Cannon, and the powerful, but slow, blasts from the weapon can make short work of characters caught in them. He is accompanied by two heavily-armored Lance Royal Guards. Together, the three of them can present a formidable encounter, although the various crates in the room provide ample cover to avoid most of their attacks. Alternatively, moving quickly around the perimeter of the room can help with avoiding enemy fire. Corrosive weapons are a very effective damage source in taking the trio down. A fair example would be placing some corrosive rain grenades as soon as they spawn.

It is sometimes possible to completely avoid combat with McCloud by keeping to the extreme back of the room just after entering. The two guards will react when fired upon, however McCloud himself may remain in position, oblivious to the incoming fire. Using this tactic, it is best to kill McCloud quickly before the other pair close to a more effective firing range. Otherwise, it is advisable to kill the guards as McCloud will pose less of a threat with his slow-firing cannon.

The Crimson Fastness is populated by a high concentration of Crimson Lance units of various types and also occasional Gatling Turrets. Battle through these to reach Patricia Tannis, who will be found incarcerated in a prison cell in the south-west corner of the stronghold.

"I see you either received my message or came here on some other errand. The Lance locked me in here and shut down the ECHO, but they left my communicator with me. That was really stupid of them. You probably hate me, but I didn't intend to betray you. Steele wanted the key and wanted you gone. Sending you after Baron Flynt was her idea, and it seemed like something you'd enjoy, so I went along with it. Now I'm trapped here, and she's taken the Vault Key."