Get Off My Lawn! is the main story mission in the Crazy Earl's Scrapyard given by Crazy Earl.

"You want a favor from me? Well, pick my nose and I'll pick yours, as the saying goes. I got trespassers crawlin' all over my property here. They got their eye on my treasure. You get out there and start exterminatin' interlopers. Then we'll see about whatever it was you wanted." 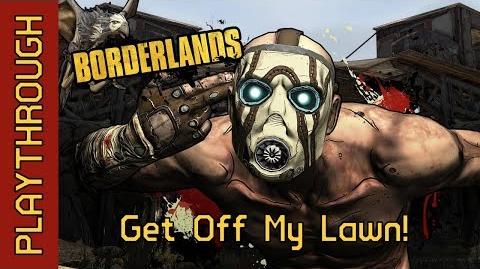 Crazy Earl wants a Vault Hunter to do him a favor, which is to kill a numbers of bandits and spiderants crawling around in his scrapyard. Just beyond his home, three spiderants will emerge and attack, which clears that requirement almost immediately. A few bandits emerge from huts deeper in, presenting the forefront of the bandit forces dominating the area. They can be found throughout most of the scrapyard, and will attack on sight.

"What the hell do you want?! You better not be taking any of my stuff. You killed all the trespassers? I have no idea what you're talking about. I don't see any trespassers."