Generally Hospital is a location which was added to Borderlands with The Zombie Island of Dr. Ned. The area is named for the hospital which was built to serve the town of Jakobs Cove. The zone covers an eastern portion of the island and is bordered by the ocean on the entire east side.

The zone is divided into two sections. Once the mission, The Pack is obtained, the second section becomes accessible.

The first section is the hospital and the hill it sits on. The entire hill is a large grave yard that extends all the way up to the gate of the hospital providing a very large number of zombies. On the right is a beach area, at the end off which is Jackie O'Callahan's former residence before he became a wereskag. At the top of the hill the hospital gate is closed, but there is a large hole on the right side of the fence. On the porch of the hospital is a Red Chest.

The second area is a large beach at the bottom of a pit. Here players will find the members of the Pack. The area also has a flock or two of Skelerakk and some Corpse Eaters.

Generally Hospital was the hospital for the town of Jakobs Cove and the surrounding area. It was built by the Jakobs Corporation to provide medical services to their employees. Dr. Ned was working on an antidote here when the plague first started.

The first area players comes to upon exiting the entry tunnel into the zone. It is a sprawling graveyard.

At the top of the hill sits the hospital and its grounds. Upon entering the front gate players are greeted with a cut scene. The building itself is not accessible.

The second section of the zone which is initially inaccessible until The Pack has been accepted. There are three metal houses here. At the north part is a lift that allows access between the cliffs and the lower beach. Even after the mission The Pack is completed, all of the wereskags will respawn. Each has a high chance of dropping Eridian Artifacts. There is also a high chance that a Loot Goon will spawn in the empty far right section of the beach. 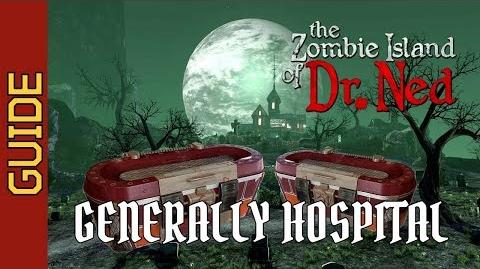