Geary is a special enemy located near the top of Mount Hellsfont in the Eridium Blight. He takes the form of an unarmed, miniaturized psycho, has low health and drops 1 of 6 Vault Hunter Heads.

This quest cannot be obtained in Normal mode, but is obtainable in True Vault Hunter and Ultimate Vault Hunter modes, and is started by looking in the fireplace in Claptrap's Place, which holds a golden gear with the label "Geary's Unbreakable Gear". The item card of golden gear reads: "Only a brisk walk to the Eridium Blight will reward the courier." This is a clue to reach Geary at Mount Hellsfont.

The golden gear has hidden rules; once it is picked up, playing in co-op, dying, fast travelling, or quitting the game will cause the golden gear to be lost and fail the "quest". It is allowable to go into Fight For Your Life mode, however. As of update 1.2.0, entering a vehicle fails the "quest". If the "quest" has been failed, the Golden Gear can be picked up again from the fireplace to restart.

Once Geary is found, he will attack with extremely powerful melee strikes. If the Golden Gear has been picked up and not lost he will only attack once, before rapidly making his way back towards the lava pool with the waterfall and jumping in. After a few seconds, three rakk will then fly in and each drop a Hyperion loot chest; two are normal, while the middle one always contains purple or E-tech loot just like the chest in Sanctuary. These crates will only appear once, when the mini-quest is completed.

Geary has a chance to drop a random class-specific head. 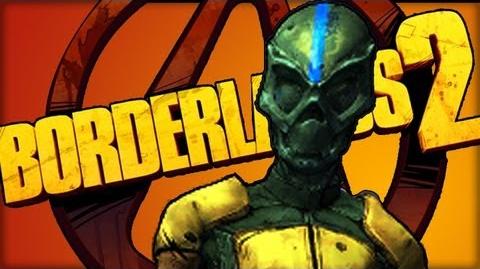 Borderlands 2 How to Get Alienation Head For Zero (tutorial)
Add a photo to this gallery
Retrieved from "https://borderlands.fandom.com/wiki/Geary?oldid=438326"
Community content is available under CC-BY-SA unless otherwise noted.