View source
watch 01:17
Who is Gaige?
Do you like this video?
Play Sound

Gaige is the playable Mechromancer class character, and the fifth playable class overall in Borderlands 2, first revealed at PAX East 2012. Gaige was added as post-release downloadable content released on October 9, 2012 for $9.99 USD / 800 Microsoft points / $14.40 AUS. Those who pre-ordered Borderlands 2 received the character free of charge. Her skill grants her the ability to control the D374-TP, or Deathtrap. She is also used as a marketing tool outside of Borderlands 2 where the character chats on Twitter and releases ECHO logs.

Gaige was a high school student from the planet Eden-5, and lovingly supported in her endeavors by her parents, particularly her father. She would often ECHOcast live about what was going on in her life and had a dozen subscribers to her channel, although this dropped over time to two. Gaige found the history behind the Vaults, Eridium, and Pandora to be particularly fascinating, and considered her era to be "the most awesomely awesome time period in history" to be living in.

She originally conceived Deathtrap, then called the Mechanized Anti-Bully Deterrent Test, or Project DT, as a science fair project to combat bullying. Her rival, Marcie Holloway, was a contestant in the science fair as well, and used her father's money to buy her way through the competition. After Gaige was inspired to amputate her left arm with a particle saw and replaced it with a robotic one she built, Marcie apparently stole Gaige's DT designs and sold them to Eden-5's corrupt police force.

On the day of the science fair in the school auditorium, Marcie's father bribed the judges, helping her win first place with a defective robot based on Deathtrap's first or second revision blueprints. Gaige, with at least a fourth revision Deathtrap, placed third. Marcie then shoved Gaige, causing Deathtrap to identify her as a hostile. Deathtrap attacked with its digistruct claws, which unexpectedly caused her body to explode the moment her skin was touched (likely all over Gaige as well), due to a miscalibration of the claws by Gaige, likely when she had added the discord circuits the night before. After the auditorium was cleaned up of Marcie's remains, the traumatized Gaige was escorted to the principal's office and faced expulsion and arrest for accidentally murdering her rival. She called her father to create a distraction to help her evade arrest, which apparently consisted of the novel use of a golf cart and lots of gasoline. Gaige and her father realized she would have to leave Eden-5 so the police and her misappropriated invention couldn't find her and after an emotional farewell, she bought a transplanetary shuttle ticket to Pandora to become a Vault Hunter. ECHOcasting during the journey, she was shocked to find that her two subscriber count had jumped to 20,000 because the science fair incident had been reported on the ECHOnet and people apparently found her channel; she explained what had happened and the subsequent fallout. After landing on Pandora, she stowed away on a train leading to Windshear Waste.

Gaige's skill tree features player challenge level variances. This would make her both the easiest and the most difficult character to play. Gaige has three Skill Trees: 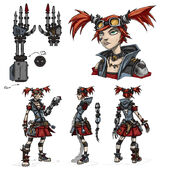 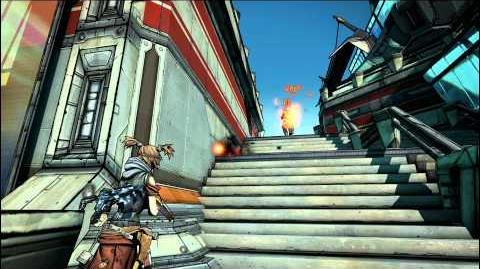