< Gaige
View source
watch 02:53
GTA: The Criminal Enterprises - The Loop
Do you like this video?
Play Sound

Gaige: Hello to you, my faithful twelve subscribers - uhp, eleven. As you all know, the Eden-5 Youth Science Fair is only weeks away. Marcie Holloway's already got her dad's indentured laborers working on a miniature thermosonic energy reactor. Because evidently all the money in the galaxy can't buy you originality. Stupid rich bourgeoisie jerkbags. Marcie never had to work a day in her life to get where she is. ANARCHY FOREVER! SMASH THE SYSTEM!

Gaige: Anyway, I've come up with a science project that will make Marcie's thermo reactor look like an interocitor.[1]

Gaige: I'm calling it the Mechanized Anti-Bully Deterrent Test, or Project DT. It's only in the prototype stages right now, but I have mathematically determined that it is going to be OFF THE CHAIN. Basically, the idea is that if you deploy a DT unit in a school environment, it's going to CLAMP DOWN on bullying by finding bullies and BEATING THE CRAP OUT OF 'EM.

Father: It's fine, dear. Love you. 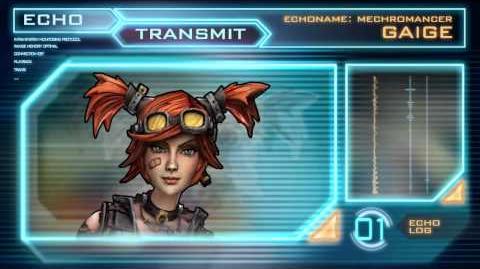 Gaige: Good news, my five subscribers. I've got the first prototype of the DT project up and running. Well, up and floating. I had to cut the legs off to reduce drag, but DT looks way more intimidating as a flying, legless torso of pure AWESOMENESS. Plus, I've equipped it with some big 'ol digistruct claws that destroyed ALL the target dummies I built in the back yard AND it accidentally got this stray cat that hopped in the line of fire, but that was her bad. So I'm making some serious progress, long story short. Ran into some hiccups, though - I mean, I haven't figured out a cool way to quickly digistruct DT into existence. I built a big spawning rod for it, but - it's just - you know, it's big, it's inelegant, it's ugly, it's a tube of metal, you've gotta carry it around, I can't figure out how to lift it.

Father: Oh, gosh, sorry. I just saw you working out here in the shed and thought you could use some hot cocoa.

Gaige: I don't need... cocoa, dad. I am a woman of science and ass-kickery, not children's beverages.

Father: Whatever you say, sweetheart, I'll just leave it here.

Gaige: Oh, ogh, yeah, that reminds me - Marcie and I got paired up for a group project during Professor Parker's unipolitics class. We're supposed to debate whether the Hyperion occupation of Pandora was justified or not. I figured, rich little daddy's girl she is, she'd be all for it, but no - she never even HEARD of Pandora. She didn't know about Handsome Jack, about Eridium, about VAULTS, for gosh's sake - we're living in the most awesomely awesome time period in history, and Marcie's more interested in reading about celebrity gossip than the fact that Hyperion may have found another Vault. Oh, AND she somehow found out about my DT project and reported it to the school board, saying something about, I don't know, how a mobile laser-equipped robot might be dangerous, or something. Whatev. I hate her. 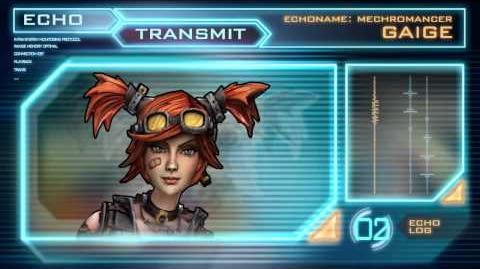 Gaige: Uh-hmm, both of you. Hmph. The science fair approaches, and I've got more updates. I just started work on the third revision of the DT project, and while I'm tinkering I sliced my arm with some sheet metal - not a big cut, it barely goes like, halfway to the bone - and it occurs to me, I could just jet the wound with an Insta-Health and get back to circumventing the Turing chip with a Hecker circuit reintegrator, OR I could kill two birds with one stone. See, I could never figure out a good method to quick-summon the DT, but as blood began to spurt from the gash in my forearm, I rea-realized it: a cybernetic limb! I could program all of DT's digistruct data into one robotic arm, and use that to summon DT at any time, any place! So I figure, what the heck, and I slice off the rest of my arm with a particle saw. And my dad's all like, "Uhh! Ohh! Uhh!" And blood's like, going everywhere. But a few hours and a few pints of blood later, I built a metal arm strong enough to smash concrete!

Sound of concrete being smashed

Gaige: Ha ha ha! Yes! So metal! Oh, and I'm trying to do devil horns with my robot arm right now, but it's not really working because like... fingers... it's a... whatever... Point is, Marcie and her stupid fusion reactor are not going to have -

Gaige: - what the hell? Sorry, my newsfeed just picked up an article with Marcie's name on it. Yuellaghh. UHH. "Local student Marcie Halloway has made a technological breakthrough which will change the face of law enforcement forever." Hm no, I don't think so. "Her new invention, which she calls the Crime Buster Bot" - wait, WHAT? Uh, hello, that is MY design. HOH, Marcie ripped off my science fair project idea! Okay, no. "Crime Buster Bot will use digistructing claws, thermosonic lasers, and quantum duplication to help law enforcement agencies subdue dangerous criminals"?! Marcie, what the hell?! She completely ripped off my DT design, except... instead of using it to stop bullying, she's giving it to the galaxy's most corrupt police force! Marcie! You are such a - sounds of objects and glass being smashed DAARGH - you complete tool! And the name - that name sucks! "Crime Buster Bot"? Bitch, are you kidding me!?

Gaige's father: What's going on in here? I can hear you from across the house.

Gaige: Dad, now is not a good time~

Gaige: Marcie Halloway ripped off my robot's design, used them to build fascist security bots for the cops, and now she's going to try to win the science fair with MY IDEA!

Father: Oh. You're going to take that bitch down, right?

Gaige: You're damn right! I'm going to upgrade my bot, and I'm going to WIN the heck out of that science fair! It is SO ON!

Father: That's the spirit! You put your mind toward your little DT project, Marcie won't stand a chance. 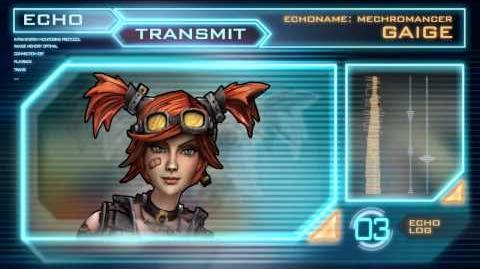 Okay. So, you may have heard on the ECHO news bulletins Deathtrap may have... slightly, uh, killed... my classmate Marcie at last night's Science Fair. Umm. HUH! Things were going good, at first. I showed off all the new tech I had added to Deathtrap since my last blog: my "Close Enough" tech, "Anarchy," "Blood-Soaked Shields," the works. All that stuff that, like, really impressed the judges, while Marcie's little rip-off bot could barely fire two lasers before overheating. So, things were looking good. I was looking really brilliant. Unfortunately, I forgot that Marcie's dad has more money than God, so he bought off the entire judges panel. So Marcie's project won first prize and I earned... third place.

Gaige: Third. Place. That is what we call politics, people. And it's really unfair, because I...

Gaige: Okay, anyway, Marcie started gloating. She started pointing and laughing at me, and then she... pushed me. It's - ok that's when things got... messy. Deathtrap recognized Marcie as a threat, so he gave her a quick slash with his digistruct claws. No big deal. That's what it's supposed to do!

Gaige: And I must have miscalibrated... them last night when I was... adding the discord circuits... 'cause the second his claws touched Marcie's skin she kind of... like... um... Okay, she exploded! She's like... EVERYWHERE! It... skin... things, uh, eyeballs, I don't know, it was gross! Anyway, sorry. After they finished cleaning up Marcie and the auditorium I was escorted to the principal's office, which I've never been to before, and I found out I wasn't getting expelled or arrested for what Deathtrap did to Marcie.

Gaige: I'm being expelled AND arrested for what Deathtrap did to Marcie, and Marcie is not getting any sort of recourse for what she did to me, which was a serious shove, and I am traumatized because, ehhh...

Gaige: I called my Dad and got him to create a distraction. He's very brilliant with things like that and I'm not going to go into details about it, but let's just say it involves a golf cart and a lot of gasoline, good job, Dad... so that I could slip away. So, anyway, long story short, I'm currently ECHO-casting from the cozy confines of a transplanetary shuttle. Dad and I figured I should probably head somewhere where the cops and their, hmm, "Crime-Buster Bots" couldn't find me. So... so after a teary farewell...I love you, Daddy!... I grabbed a ticket to Pandora. Which, I-I mean... I-I-I've always been kind of interested in Vault hunting, but who knows? Maybe here my talents will actually be appreciated and I won't go to jail for being brilliant. Third place. I mean, seriously! Bastards. 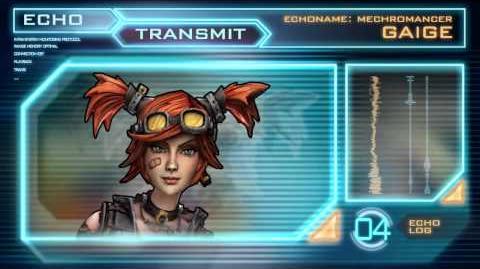 Getting an Anarchy Stack

Jumping in a vehicle

When Spotting a Badass

Challenging another player to a duel

Being challenged by another player

​Fast travelling while someone is still in the menu

​When out of ammo

Rolling a Dice Chest once

2. "Klaatu Barada Nikto!" is a reference to the 1951 science fiction movie The Day the Earth Stood Still.

3. "Exterminate!" is a reference to the famous mantra of the killer robots, the Daleks, from the British sci-fi drama, Doctor Who.