Fuel Feud is an optional mission in Borderlands that becomes available on Lucky's Bounty Board after Powering The Fast Travel Network is complete.

"The worst part about living out here isn't the frequent skag attacks, it's the traffic. And by traffic, I mean those bandit bastards that think they have a right to shoot anything that moves. Hit 'em where it hurts. Destroy their fuel tanks so we can ride free!" 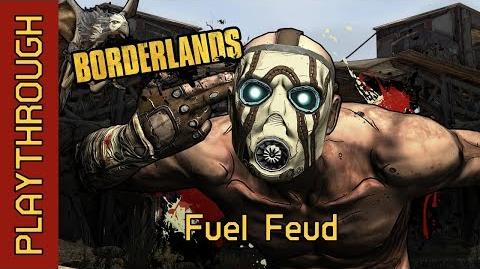 This mission becomes available after the Fast Travel Network is powered up. There are three fuel tanks around Dahl Headlands to destroy.

One is north-west of the watering hole, right near the Catch-A-Ride at the base of the giant hill. Bandits will come out and defend the fuel tank, so kill them quickly.

One is at the Ludicrous Speedway, in a small enclosed yard adjoining the office building there. Unlike thse other two fuel tanks, the enemies here are scythids and not bandits. The building will contain mainly Crawlers and Desert Scythids, while the yard outside can spawn any scythid.

The last one is in the north-west corner of the map, right below the pool. This fuel tank is protected by bandits, and defeating them can be difficult for low-leveled characters due to a one-way entry point, which allows the enemies to focus fire more effectively.

Each tank takes damage based on the number of hits it takes, rather than the damage inflicted by any single hit. Hence a repeater is more effective here than a rocket launcher.

"That oughta slow 'em down!"