OK, so I've read the Draco page, its talk page, and the forum Draco posts - and I'm still confused. I see it stated all the time that a Draco must have a mag of 120-124, or it's not a Draco. Why not? S&S machine guns which have the Draco accessory can definitely spawn with smaller mags, so why aren't those weapons Dracos?

Here's an image of one I got as a drop from Craw today:

As you can see, it has the Draco accessory but a mag size of "only" 93. To check I recreated it in GearCalc; here's the code:

Can somebody please explain to me definitively why all these MGs are not Dracos? Is it that they wouldn't have a high enough Tech Level to spawn as Orange rarity weapons with the red text (assuming the Draco could actually spawn properly in game with the red text)? Or what? Outbackyak 18:07, July 17, 2010 (UTC)

The gearcalc isnt perfect, with revolvers you can add the maliwan pestilent defiler accessory to most legendary revolvers (i.e. dahl anaconda) and it stillis listed as legit. but we know the game will not spawn that way. Im gonna go fool around in gearcalc for a minute, i want to test an idea They call me Hellz Lips 18:22, July 17, 2010 (UTC)

I didn't know that about the Pestilent Defiler error (damn, I wouldn't mind finding an AX300 D Pestilent Anaconda - 1341 Dmg!!!!), but that's obviously just a problem with GearCalc - normally it would say "manufacturers must match: check manufacturer-specific parts". The image above is from an in-game drop, so it is definitely legit, and I can't see why it wouldn't be called a Draco. A pretty ordinary Draco, admittedly. Outbackyak 18:48, July 17, 2010 (UTC)

1 - Gearcalc does not even have the title "gd_weap_support_machinegun.Title.TitleM_SandS_Draco" in its inventory so it cannot make a "legit" judgement on all those variations. But BL can.
2 - The "white rarity, x2 Incendiary" MG described above will not spawn in BL as either a 'Draco' or 'Machine Gun' so some component is not valid even though Gearcalc says it is.
Maybe a little research on the Gearbox forums will turn up the requirements for a Draco. -- MeMadeIt 20:02, July 17, 2010 (UTC)

Folowing MeMadeIt's suggestion, I've been looking through the Gearbox forum - and the short answer is: there doesn't seem to be a consensus there on what makes a Draco a Draco.

It's been a while since I had 'em, but I know i did have a couple of Blue MG's with x3/4 incendiary and a 120 magazine size, so it is possible. I wish I would have kept them, but the hellfire I use works a lot better... so bye-bye Draco.   Uberorb

Again, I've already proven that just having the Draco accessory is not enough. Low-end machine guns with the Draco accessory won't appear in your inventory in-game despite Gearcalc saying they're legit. This also seems to apply to small mag sizes. So far, I'm beginning to suspect that a Draco must have the Draco accessory AND a large mag (90+) AND Material quality 2 or 3. More testing is needed to confirm. -- MeMadeIt 04:38, July 18, 2010 (UTC)

Well here's a blue rarity with the Draco accessory, and it's only Material 1 according to GearCalc (this was a drop from Craw). It does have the biggish magazine (90). 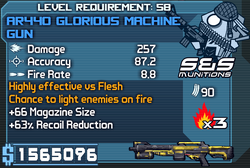 I'll go on looking and see if I can find examples with smaller magazines or lower rarity - hopefully we should be able to clear up the question. --Outbackyak 21:19, July 18, 2010 (UTC)

Here's a really interesting one

It's an AR440.3 Glorious Mauler (another drop from Craw). No incendiary, but isn't that the Draco Accessory under the barrel!? And it only has a clip of 64.

What's even more interesting is that I was unable to recreate it accurately in GearCalc; the closest I could get was to give it no accessory at all, but then it was blue rarity and only 274 damage, and named Glorious Machine Gun. It's as if the Draco accessory is giving it both a rarity and a damage boost, but without giving it any incendiary effect. Incidentally, it's definitely not the Shattering accessory, as that looks quite different (and would make the damage 351). [EDIT: nor is it the Deathly accessory - they look very similar, but the little horizontal yellow flash is at the front of the Deathly, not the rear like the Draco; and the Deathly gives 309 damage, and the Glorious Machine Gun title in GearCalc. ENDEDIT]

Seems to me that this suggests that when the clip is smaller than 90 BL ignores the Draco accessory's incendiary effect entirely, and also ignores its boost to clip size. What do other people think? --Outbackyak 02:02, July 19, 2010 (UTC)

False alarm I think. I now think that it is the Deathly accessory, not the Draco. I've just got another Glorious Massacre which has the Deathly accessory and they are visually identical - the yellow flash is in the same place as the Draco accessory. I'm not sure why GearCalc won't let me replicate the stats of the AR440.0 Glorious Mauler, but it may just be a bug in the program. Outbackyak 20:42, July 19, 2010 (UTC)

Im no expert and i dont think the gear calc is perfect but from what i have been able to figure out from it machine guns cant seem to get higher than a x2 incindiary with out the draco acc.
Now if the acc. is the determining factor and since other legendary guns come with varying mag sizes, accuracy, and fire rate then it only makes sensce that if it has the accessory its probably
a draco.Veggienater 23:20, July 24, 2010 (UTC)
Who cares, Draco's are like the most disappointing weapons in the game, you get a X4 Fire weapon that only lights up every 5th shot or something??? Dracos are terrible DroidCLH 03:48, August 17, 2010 (UTC)

How about checking the dates of the last posts before replying? Was there really a reason to reply to a thread nearly a month dead? BTW, the 'who' are the techie types who want to learn more about 'how' the game functions, not just whether it's terrible or not. -- MeMadeIt 09:24, August 17, 2010 (UTC)
Why not keep it alive? their are email updates besides once again id rather look up how good weapons works than how terrible weapons work why know more about what you'll never use?DroidCLH 17:56, August 17, 2010 (UTC)

@ DroidCLH: Like MeMadeIt said, I started this thread originally because I was interested in how the Draco works and its components (I agree that as an incendiary weapon it sucks compared to the Hellfire or the Firehawk). But I was also interested in the misinformation that was being promulgated about the Draco, where people were saying that it could only have a magazine of 120 or 124, which I think has now been shown conclusively to be incorrect - I've found weapons with the Draco accessory that have magazines as "small" as 90. Whether it can go lower than this I don't know. As to your point about wanting to know about good weapons, not bad ones - fine, but why bother replying to this thread then? Outbackyak 05:52, August 18, 2010 (UTC)

Bizarre! I know you've heard this line a thousand times, but: "I got this gun as a drop from Craw. It's totally legit." And in this case it's the truth. It dropped as a Glorious Mauler, with the stats as given. I only play solo, so there's no way that somebody dropped it on me without my knowing. And I did not mod it up in Willowtree.

I realise that nobody is going to believe me - people who know me on this Wiki are also well aware that I know how to use Willowtree, and I even make a point of mentioning that fact on my home page. I frequently mod up weapons for fun, but as I also say on my home page, every weapon I've posted on this Wiki has been found in-game. And I stand by that statement - I do not post up modded weapons, period.

The only thing I can think is that GearCalc's "legit" test has an error in it that says this weapon is not legit, when it actually is. This is quite possible, since it has other errors which say gear is legit when it is not - e.g. you can make a Dahl Anaconda with the Maliwan Plague [EDIT: Defiler ENDEDIT] accessory and GearCalc says it is legit when it manifestly is not. GearCalc is not perfect; like any program it has bugs. This must be one of those bugs. Outbackyak 12:05, October 18, 2010 (UTC)

Hm, Gearcalc error is always a good excuse; but I checked it, and maybe it is one:
In the 'Checking for legitness' section it says:

But if I'm only half as good in math as I think I am 1,8 IS equal 1,8 so the test would theoretically have been passed... or Geaclc is rounding the values for the text too strong and the gun is modded. BreakdancingYoda 12:29, October 18, 2010 (UTC)
Can get everything but the damage to match using the shattering acc, but then I've found gearcalc's damage and bonuses don't always match up in game. heres the code...

Gearcalc says it's legit and the shattering acc looks similar to the draco acc... maybe the material makes a difference to how it appears in game. TheDataAngel 13:04, October 18, 2010 (UTC)

I don't think it's the acc1_Shattering; acc4_Deathly just looks more like on the picture from Outbackyak. But another interesting fact regarding a possible Gearcalc error: with some seemingly random level requirements the gun code from Ethrad actually IS auto-named 'Mauler'... and the Mauler-test 1,8 ≥ 1,8 is sudenly passed... try at level 58 (like on picture) and you get 'Machine Gun', on level 59 or 54 it is a 'Mauler', although the parts did not change. Looks like an error in Gearcalc, i'd say. BreakdancingYoda 13:27, October 18, 2010 (UTC)

@ Yoda: Well, that's probably it - though I would say that wouldn't I? At least it holds the door open for people believing me on this issue - I actually take a great deal of pride in my reputation on this Wiki. I may not be a guru like some of the regular posters, but I've done a fair amount of work editing pages and researching issues in the game, and this matter has me rattled. Because if I lied about this, why should anyone believe anything at all that I've written about Craw legendary drop rates, or Knoxx's Gold effects, or Orange and Purple drop rates in the Gift Shop etc etc? 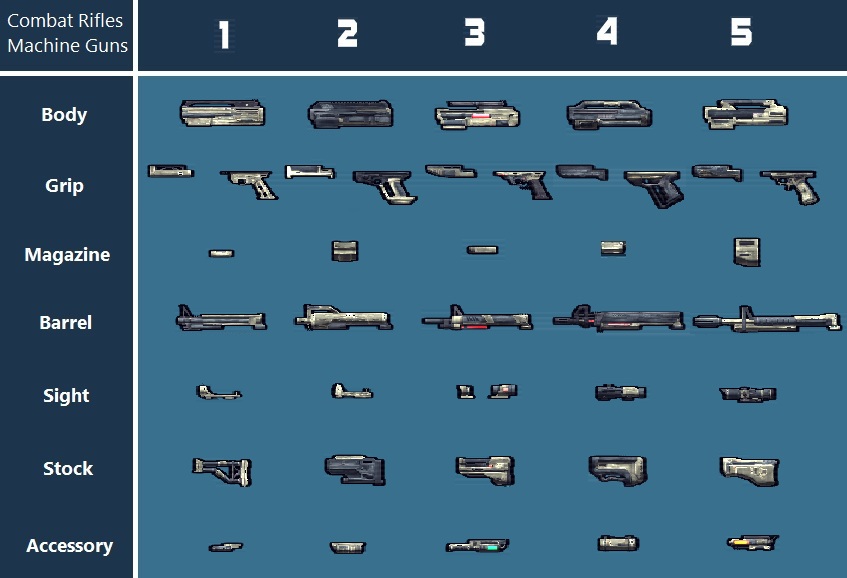 @ Yoda
Funny, because when I reconstruct the gun I'm told that the value of the Mauler prefix is 1.80, which doesn't pass. Perhaps there is a decimal place that is not shown? Also, 1.80 is not technically greater than 1.8. It's basically the same number, so it shoudln't pass, right?. Other than that I can't really explain why it says it's not legit, though I had to place the prefixes on the gun to get the stats. Ethrad 21:12, October 18, 2010 (UTC)

Retrieved from "https://borderlands.fandom.com/wiki/Forum:Yet_another_Draco_question?oldid=203556"
Community content is available under CC-BY-SA unless otherwise noted.